Home » Blog»XP Deus Blog » Confirming the history books with a [...]

Confirming the history books with an XP Deus

Categories: XP Deus Blog
Tags: archaeologists, deus, finds, information, reporting, reports, stories, treasure, users, valuable, xp
1 Comment »
Last summer I did a talk and display for villagers at a North Somerset Village.
The finds over time which have fallen to the XP Deus have changed their local history.
2000 years of left behinds have been an eye opener to both them and myself when unearthing them.
I will talk about one such trip.
The Local church was built by the close friends of William the Conqueror, who rewarded them the Percival family who later brought over their own Normandy font for the church they built near their Manor House.
I have a local History book and there is a section where a man in the later 1600`s met who he described as an old man from many earlier years.
The old man told him of the the time when he remembered Oliver Cromwell’s troops wrecking the church.
He said they smashed the painted class windows and threw the candle sticks out the door.
I managed to get a special concession to detect the small area by the graveyard where some of the Percivals lie at rest.

The most significant finds came only 25 yards from the church door when I unearthed a piece of lead framing with some of the painted green and yellow glass still in situ. 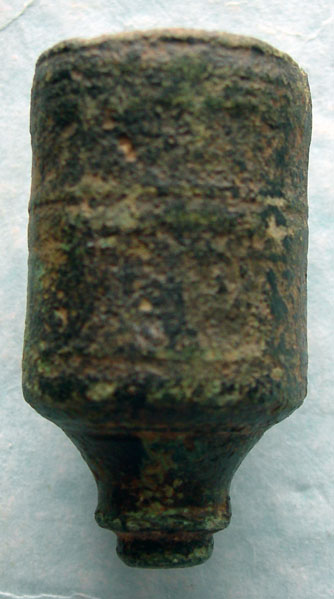 As I went on I actually found the top of a candle stick holder close to the lead and painted glass.
Well there you have it a detectorist was able to substantiate the writings in that part of the book from all those centuries ago.

One Response to "Confirming the history books with an XP Deus"