Visiting the Jersey hoard through the eyes of a metal detectorist

The Jersey hoard bought to you by XP Metal Detectors

The Jersey hoard is now at the La Hougue Bie museum where it is being dis assembled and recorded.
It’s name is Le Catillon II as Catillon 1 was discovered in 1957…On the same field !
I have heard people talk about the museum, however had no idea of its attention to detail until I visited in person, naturally the Jersey hoard is the center of attention but it is surrounded by magnificent finds dating back to neolithic times.
As a metal detectorist I felt proud to be a member of the detecting fraternity, because most of the finds on display were all down to us guys….Well Reg and his club, if it wasn’t for their dedication and the willingness to work with the Jersey Heritage massive parts of history would be lost forever.
And laid out in front of me for the world to see was solid proof that us guys really do a great job and are not “Treasure Hunters” like the media would like to call us, but another branch of Archaeologists who choose to use metal detectors to save history.

La Hougue Bie is a historic site, combined with a with a museum, it’s located in the parish of Grouville.

Hougue is a Norman word meaning mound, and comes from the Old Norse word haugr.
The word Bie has an uncertain origin.
Underneath the earth mound is an 18.6 metre long passage to what’s though is a burial chamber which was in use around 3500 BC .
During recent years Archaeologists have removed the soil from one face of the mound to see if the construction is all earth, they were amazed when they uncovered a perfect stone structure beneath the earth, with clear details of skilled stone masonry. 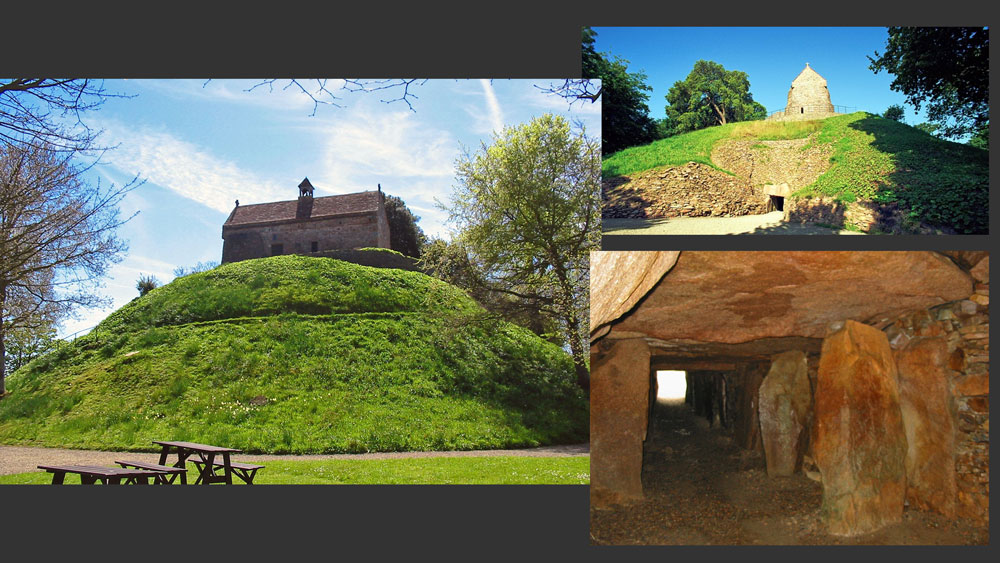 On the top the mound are two medieval chapels, one 12th Century and the other from the 16th Century, the public can still visit the chapels and the chamber.
During World War II it was used as a key lookout point, and an underground command bunker was built in the mound and adjacent to the chamber. On a day with good light you can still see the medieval paintings on the ceiling.
Weddings are still held in the chapel.
The museum hosts a vast array of finds dating back to the stone age. Several coin and artefact hoards are on display in a well-lit environment. The Jersey Hoard Le Catillon II is on full display behind a screen. Visitors can clearly see the hoard being dis assembled and the staff including Reg and Richard are more than happy to stop work and answer any questions. 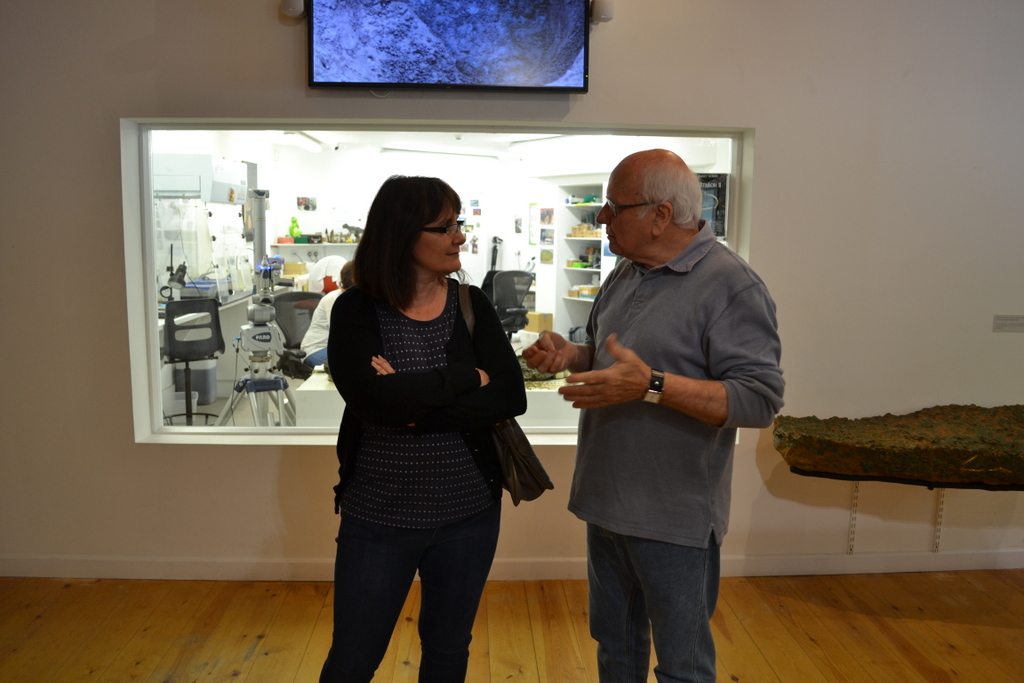 There are several other hoards on display at the museum, many of which were found by Reg and his club, it’s a fantastic place to visit.
Some hoard on display date back to the stone age. 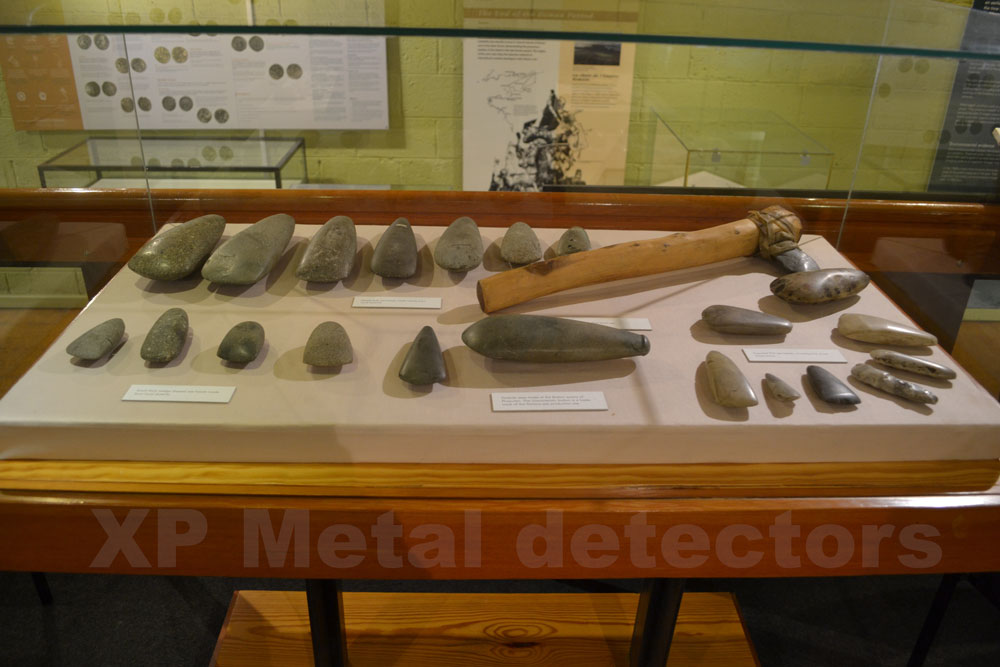 The museum purchased a laser scanner with metrology arm and can measure within 50 microns, that’s a 20th of a millimetre. 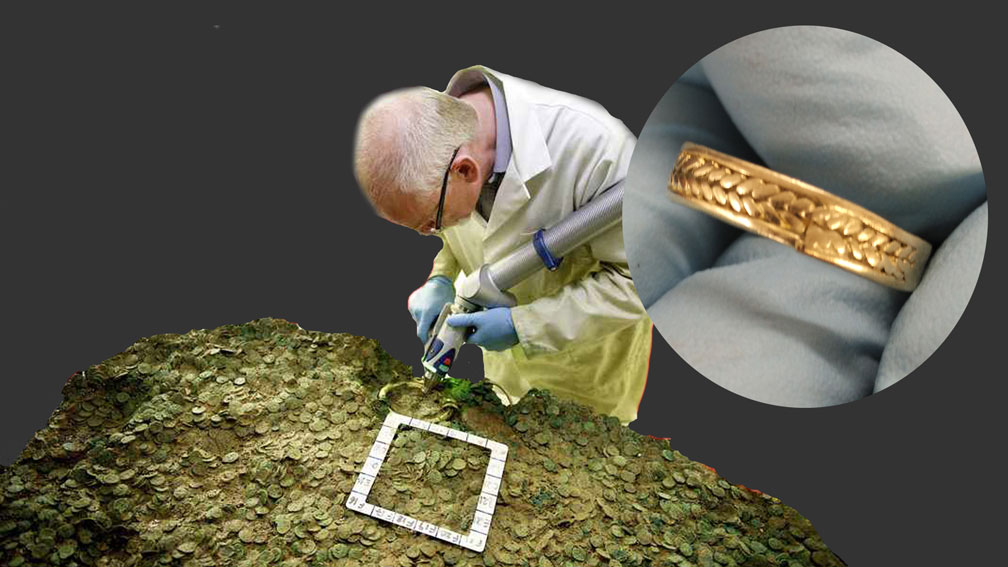 The coin cleaning process consists of a mild acid soak and then gentle picking with a thorn as this will not damage the coins surface.
Reg and Richard have undertaken extensive training and now work at the museum cleaning and recording, they are now experts on Jersey coins and indeed historic Jersey.
On a good day they can clean and record 200 coins.
Here is a before and after 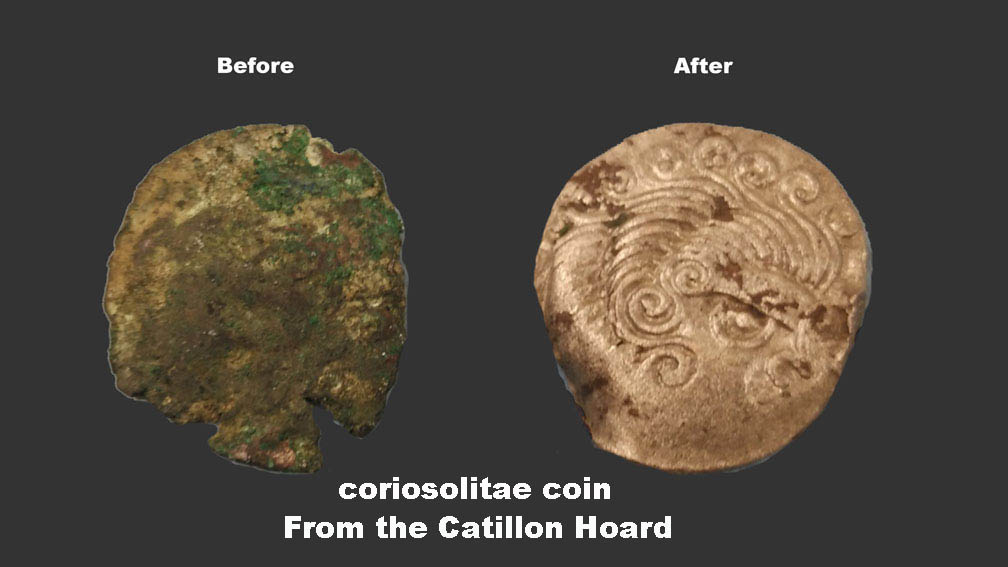 Items cleaned and recorded so far 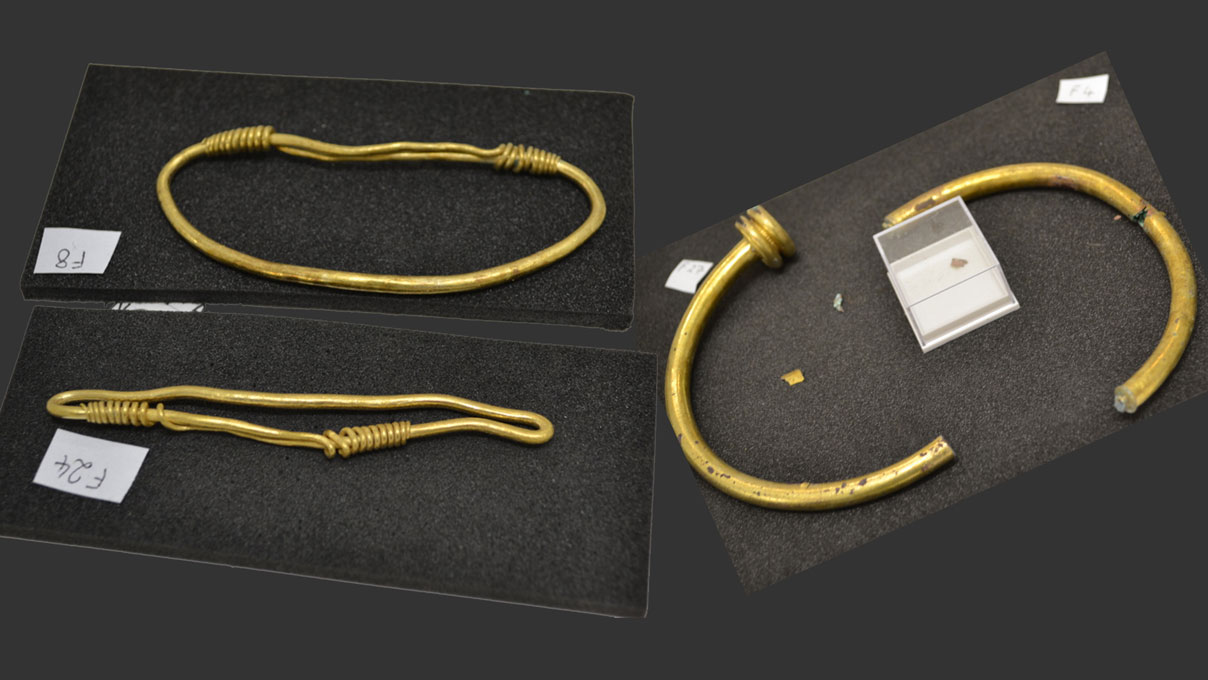 Some Jersey coins were the XN series Silver based stators which were originally linked to the Abrincatui tribe from the Avranches region in Normandy, they are rare coins, many locals know them as “The Moon Stater” The hoard consisted of mainly coriosolitae staters and are common to Jersey. 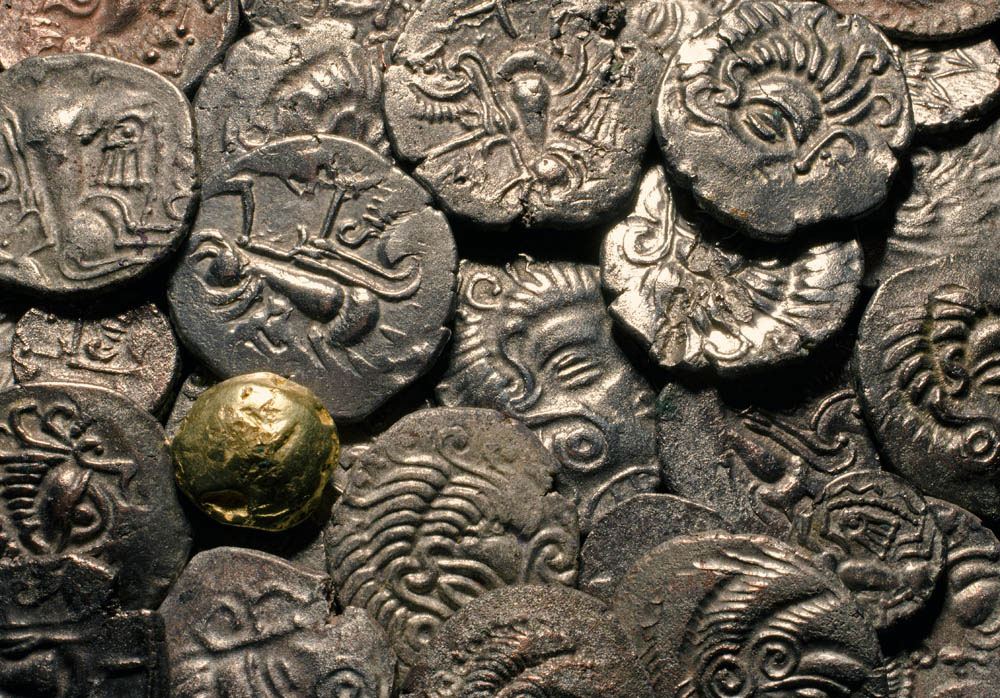 The hoard lives under a water vapour screen to mimic real underground conditions and preserve the coins and artefacts until they are ready to be removed. 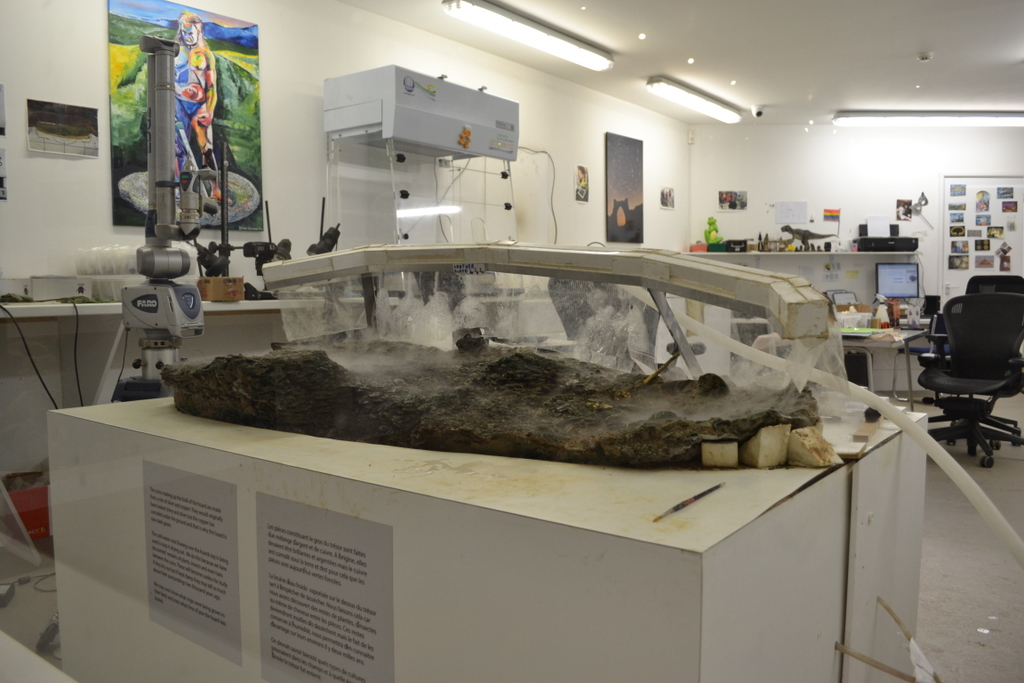 Neil Mahrer head conservator for the museum made a fantastic replica of Catillon II, all the coins are hand painted and look exactly like the real thing. It can be seen in the museum proudly on display in front of the real hoard. 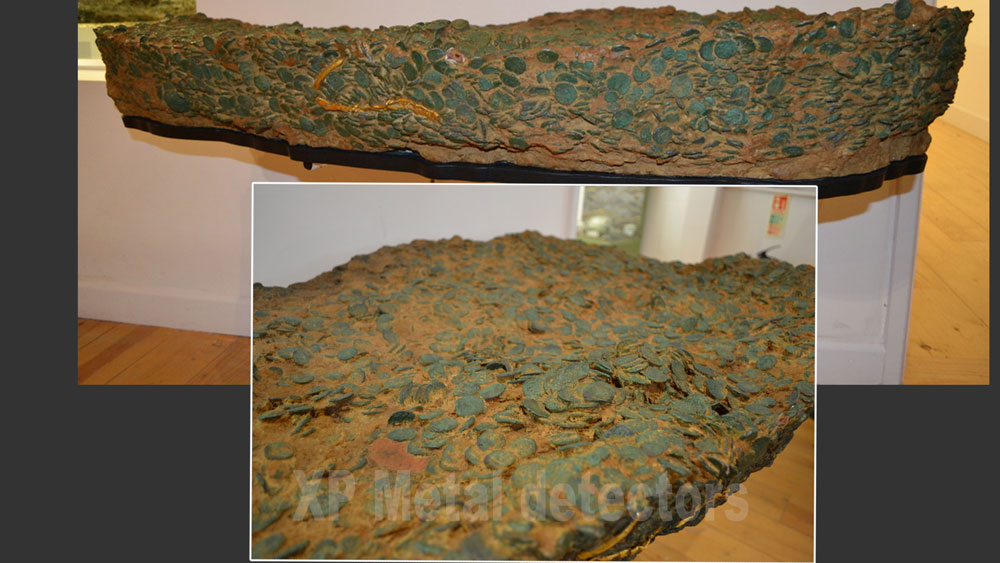 The hoard replica made of resin 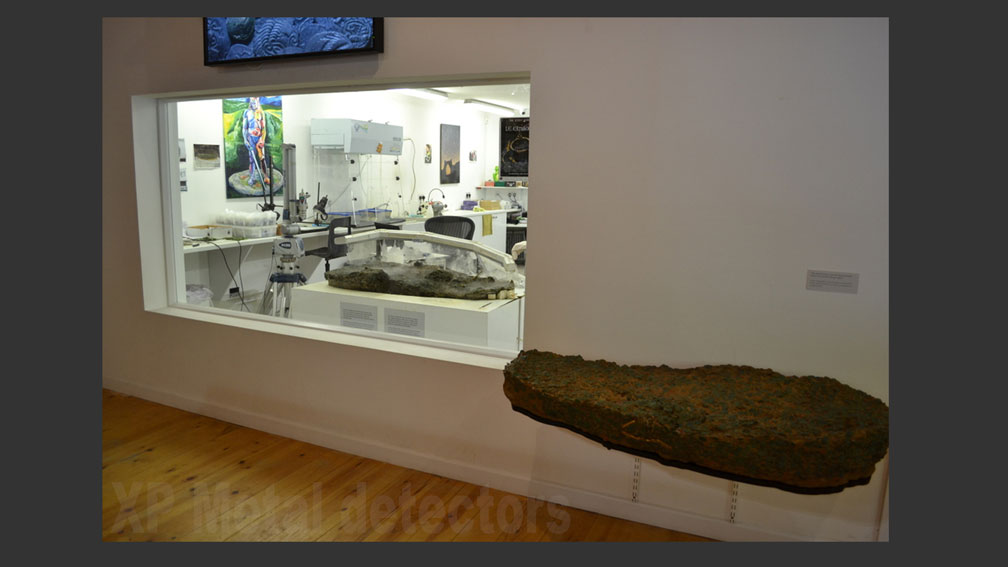 Avranches is now twinned with St. Helier in Jersey.
There is now a book available called Le Catillon II 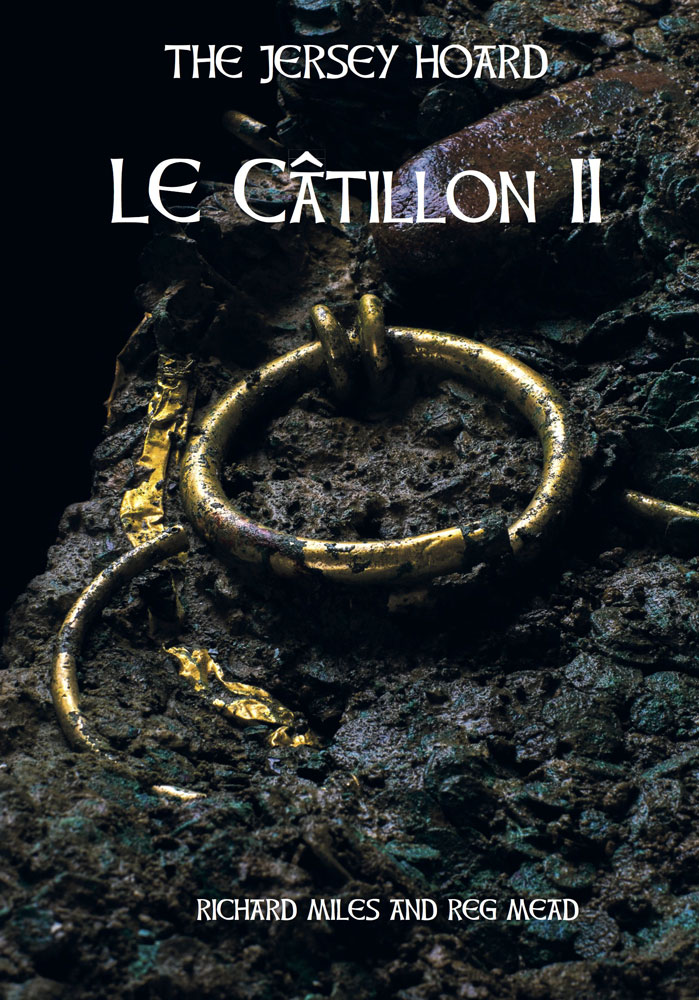 I have a signed copy of Catillon II by Reg Mead and Richard Miles, it’s free…All you need to do is register here at the  The XP world-wide Forum and post yes please or a comment about this article under the Catillon II competition section.

Visiting La Hougue Bie
A visit to the La Hougue Bie in Jersey is a must for every detectorist the finds on display are truly amazing viewing the hoard in it’s natural form is a once in a lifetime opportunity, once it has been dis assembled and recorded it is possible we will never see it like this again.

*Important note :
Please DO NOT take your detectors to the island unless you have special permission, customs and detecting laws are very strict.

We recommend staying at the Grand Jersey hotel.

If you have any nice XP finds, tips or XP detecting events we would love to incorporate them into our XP Social Media sections so please keep us posted.