My Deus experience by Richard

I’m a relatively new user of the xp deus, ive only had it a couple of months now, but already I know it has revolutionised my whole detecting experience, so much so that I wish I had ‘taken the plunge’ earlier..

It wasn’t that my previous machines were bad, the opposite in fact, they were well known and well rated machines. Because I live in greater london i mainly go on club digs which are all over southern England. There are hugely varying conditions from area to area and week to week. I just didn’t have confidence in my detectors as far as flexibility and adaptability goes. I always had the feeling that ‘if only I could adjust this a bit more’ or ‘if only there was a way of changing that a little’ which inevitably lead to that sneaking suspicion I was missing good targets. 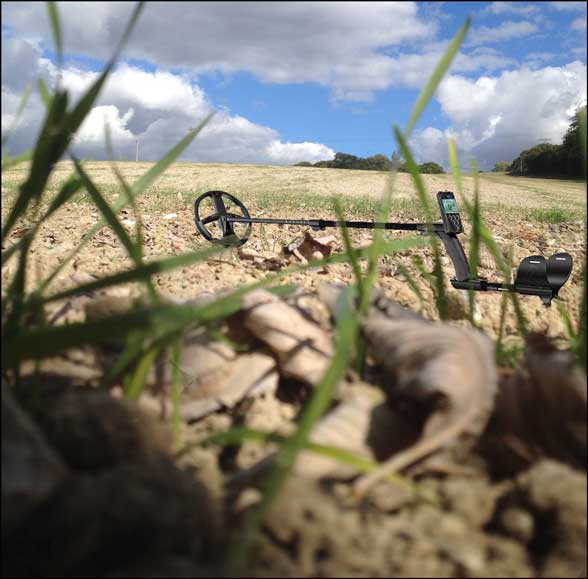 I’d always noted that the deus users in my club, (Surrey searchers MDC), made a good show finds wise. Also, I’d also noted the weight, or rather lack of it. As a sufferer of carpal tunnel syndrome this was a massive factor in my choice of Deus over other ‘top flight’ machines.

But I diddnt buy one for a long time, to be honest mainly because of the high price, eventually I came to accept the fact that I love this hobby and, financially speaking, the XP Deus would be a good investment.

My wife however, didn’t quite see it like that, apparently that hard earned money could buy a holiday, or a car, or even (shocking suggestion) pay our outstanding bills! Besides, I already had 3 perfectly good metal detectors.

I thought about it and could see her point, so rather than spend my wages I decided to sell my old machines and spare coils, as well as some other items, to raise the money, cash promptly raised (without spousal disquiet) I excitedly ordered the full deus with 11″ coil and ws4 ‘phones..

When it arrived, like new deus owners in the past (and future) i spent a considerable time just gazing at it, I’d seen them before of course,and even briefly handled them, but actually having my own to consider at my leisure was something else… what a marvel of industrial design! And what amazing micro-electronics to have such capabilities! And SO light!

At this point I must admit to being slightly intimidated by it too, I’d heard of alien things like ‘silencer settings’ and ‘tx power’ but upon reading the manual, and then experimenting with air tests followed by a quick spin on my iron infested ‘test bed’ (aka back lawn) I found it incredibly intuitive.. It can be as simple, or as complicated as the user wishes. My faith in it was quickly growing.

The first club dig after my new acquisition was on pasture, not ideal but good experience nonetheless. After initial start up I decided to keep it simple and worked basic 1 for a few hours to get to grips with it without ‘trying to run before walking’, the second good sounding target was a nice Victorian ‘bun head’ ha’penny which also helped my growing confidence, after this were typical finds from British pasture, none (unsurprisingly) with any particular age..
After lunch and chatting to other club members who use the Deus, I switched to GM power and found a sterling sporting brooch, engraved and dated 1909 from a quoits league! This turned out to be the find of the dig for me, and indeed the club as a whole.. Not a productive day, I enjoyed it but more importantly learnt a lot.

Since then my confidence using the deus has improved massively with experience, last club dig  (amongst other things)  I found a Scottish hammered silver penny, a first for me, I.D’d with the help of garysdetecting forum users as a 13th Century voided long cross of AlexanderIII, (moneyer = Walter, mint = Berwick) not in itself a rare coin, but the reverse is ‘retrograde’ making it very unusual.
A very satisfying find for me personally.

I really enjoy swinging this machine, I no longer have that niggling doubt and, as I’ve already said, it has been a real confidence builder, I can now make those little tweaks and adjustments where necessary.
Do I find more now?..  Who can truly say?.. But I definitely enjoy it more..

Comparing the XP Deus to my old machines is like comparing a Ford C to a Ferrari, they both get you from A to B sure enough, but one of them is fast and powerful!