The UK Treasure act and the PAS

This is a voluntary scheme to record archaeological objects found by members of the public in England and Wales. Every year many thousands of objects are discovered, many of these by metal-detector users, but also by people whilst out walking, gardening or going about their daily work. Such discoveries offer an important source for understanding our past.

In the past, finds such as these were, in some cases, taken to local museums to record. However, many more finds were unrecorded as there were not always systems in place to do so, often due to lack of resources. 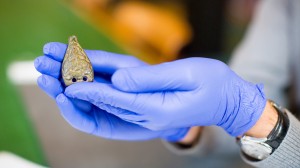 A further problem was presented as the removal of an archaeological object from the ground without properly recording the circumstances of the find can lead to loss of knowledge of an object’s context, or provenance. Context is vital in archaeology in order to be able understand past human activity. Archaeology is not simply about studying isolated objects. How these came to be where they were found, their relationship to other objects and stratigraphy (position in the ground), among other factors help build up a picture of the past as a whole. The Portable Antiquities working document

These unrecorded or unprovenanced finds meant a loss to knowledge of the archaeology and history of England and Wales.

In March 1996, during the run-up to the passing of the new Treasure Act, what was then the Department of National Heritage (DNH) (now the Department for Culture, Media & Sport (DCMS)) published Portable Antiquities. A discussion document. The aim of this document was to complement the impending Treasure Act, address the issue of non-treasure archaeological finds and to propose solutions for dealing with these.

Proposals for both voluntary and compulsory schemes for reporting and recording non-treasure finds were put forward in the document. Views on these were sought from a variety of interested parties, including professional archaeologists, metal detectorists and others.

The general response to the DNH’s proposals was that the recording of all archaeological finds was important and that a consistent voluntary scheme to record finds should be established.

Aims and objectivesThe Portable Antiquities Scheme is a partnership project which records archaeological objects found by the public in order to advance our understanding of the past.In order to do this the Scheme

The PAS is run by the British Museum on behalf of the Museums, Libraries and Archives Council and works through 33 principal partners which employ staff and many more local partners which contribute to each of the posts. There is a network of 39 Finds Liaison Officer posts, based in museums and county councils throughout England and Wales, six National Finds Advisers and a team of four at the British Museum. The data gathered by the Scheme is published on an online database (www.finds.org.uk).

In order to fulfil the aims of the Scheme staff

Note: After the governement spending review of July 2010, the MLA was wound-down and ceased to exist in May 2012. The PAS is now simply run by the British Museum.

Any metallic object, other than a coin, provided that at least 10 per cent by weight of metal is precious metal (that is, gold or silver) and that it is at least 300 years old when found. If the object is of prehistoric date it will be Treasure provided any part of it is precious metal.
Any group of two or more metallic objects of any composition of prehistoric date that come from the same find
All coins from the same find provided they are at least 300 years old when found (but if the coins contain less than 10 per cent of gold or silver there must be at least ten of them). Only the following groups of coins will normally be regarded as coming from the same find:
hoards that have been deliberately hidden
smaller groups of coins, such as the contents of purses, that may been dropped or lost
votive or ritual deposits.
Any object, whatever it is made of, that is found in the same place as, or had previously been together with, another object that is Treasure.
Any object that would previously have been treasure trove, but does not fall within the specific categories given above. Only objects that are less than 300 years old, that are made substantially of gold or silver, that have been deliberately hidden with the intention of recovery and whose owners or heirs are unknown will come into this category.

WHAT SHOULD I DO IF I FIND SOMETHING THAT

You must report all finds of Treasure to the Coroner forthe district in whichthe finds weremade, either within14 days of the dayon which you made the find orwithin 14 days of the day on which you realised that the find might be treasure(for example, as a result of having it identified). The obligation to report finds applies to everyone, including archaeologists.
The UK law states a landowner has sole title to any archaeological artefacts found on his or her property. It is always advised that metal detectorists should make a written an agreement with the owners of the land they detect on to share any proceeds from treasure sales.