A day of dreams with my XP Deus

To say I was excited was an understatement, I had found my very first Celtic stater (albeit a contemporary forgery) on a new permission as well as a really nice quinarius of Emperor Allectus along with a few other Roman bits and pieces. The story picks up with my second visit to the farm.

It’s was quite a drive to the permission from my home so I was up early to make the most of my day. On arriving at the farm I was somewhat dismayed to see the gates to the fields locked, the farmer appeared and told me that the bottom of the lane had flooded so not to take my car down there. So, my first job was a 1 mile walk with all my kit !

As I got closer to the fields I had a choice of three fields to go at, at this point it would have been easy to just go straight to the field where I had found my stater last week, but I needed to start on the other fields at some point so with the help of a very technical method (eenie-meenie-minie-mo!!!) I selected my field. As it happened it was the stater field anyway!!

I carried on around the track to take me to the top end of the field where I wanted to start. I hung my backpack off a tree and got ready to go, the first few signals were the usual junk we pick up, 2 shotties, and a bit of non-ferrous scrap. This continued for the next half hour as I worked my way around to a bend in the hedgerow.

The next signal was unmissable, my XP Deus sung out loud and solid

I stuck in the spade and heaved a clump out, quick sweep and the target was in the clod. Out with the probe and within seconds my first coin was in my hand…. A lovely Trajan Denarius shining back at me! Now that is not a bad start in anyone’s book! I admired it for a few seconds and tucked it safely away into my finds box. 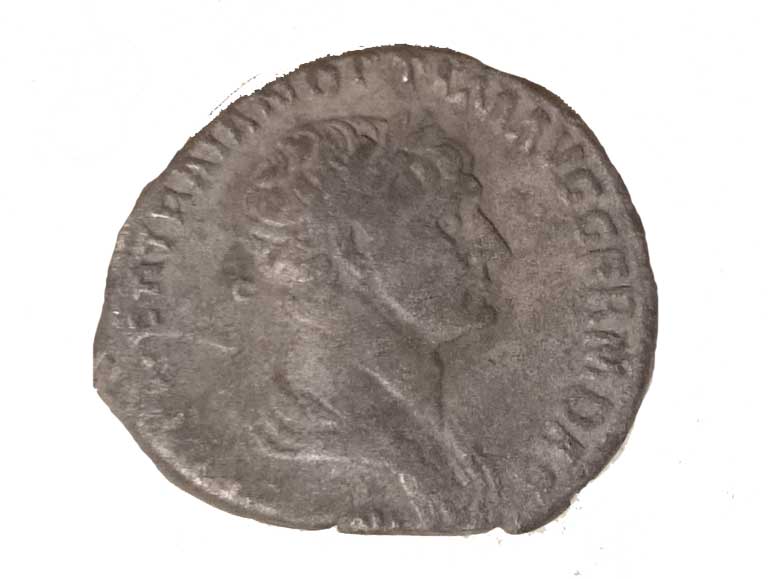 Unbelievably two more steps and the Deus is singing to me again, a slightly higher tone this time so I’m thinking copper coinage. Sure enough after a quick dig a George III half penny is in my hand. This was quickly followed by another one in close proximity, so I’m thinking a mini Georgian pocket spill has occurred at some point in time. Both these coppers were in very good condition as opposed to the usual blank disc which is always a bonus.

I had a quiet few minutes as I worked around the corner of the field and decided it was time to stop to answer nature’s call! Job done and zipped back up I turned around and started swinging again, after two sweeps another ear bashing signal came through so I was guessing another copper coin. In actual fact it turns out to be a nice lead brooch/mount and I am presuming Roman in age.

Next signal was one of those “do I don’t I” sort of ones, from one side it was pretty good but from the other side almost nothing. I’m glad I dug it because after a couple of minutes probing around I had a lovely little buckle in my hand complete with its pin. No wonder the signal had been scratchy this thing was tiny!

The next few signals were a selection of Roman grots and even the odd minim thrown in for good measure. The signals on the minims were as you’d expect very quiet but good enough to dig. I had never found one before and was amazed by how tiny they actually were, but some detail could still be made out on them showing tiny radiate heads.

I checked my GPS to see what sort of tracks I was making and decided I would do one more stubble free row before turning back to where the majority of my finds had been showing up. I walked a few steps over some un-detectable stubble until I found another combine-flattened row I could get a clear swing in. 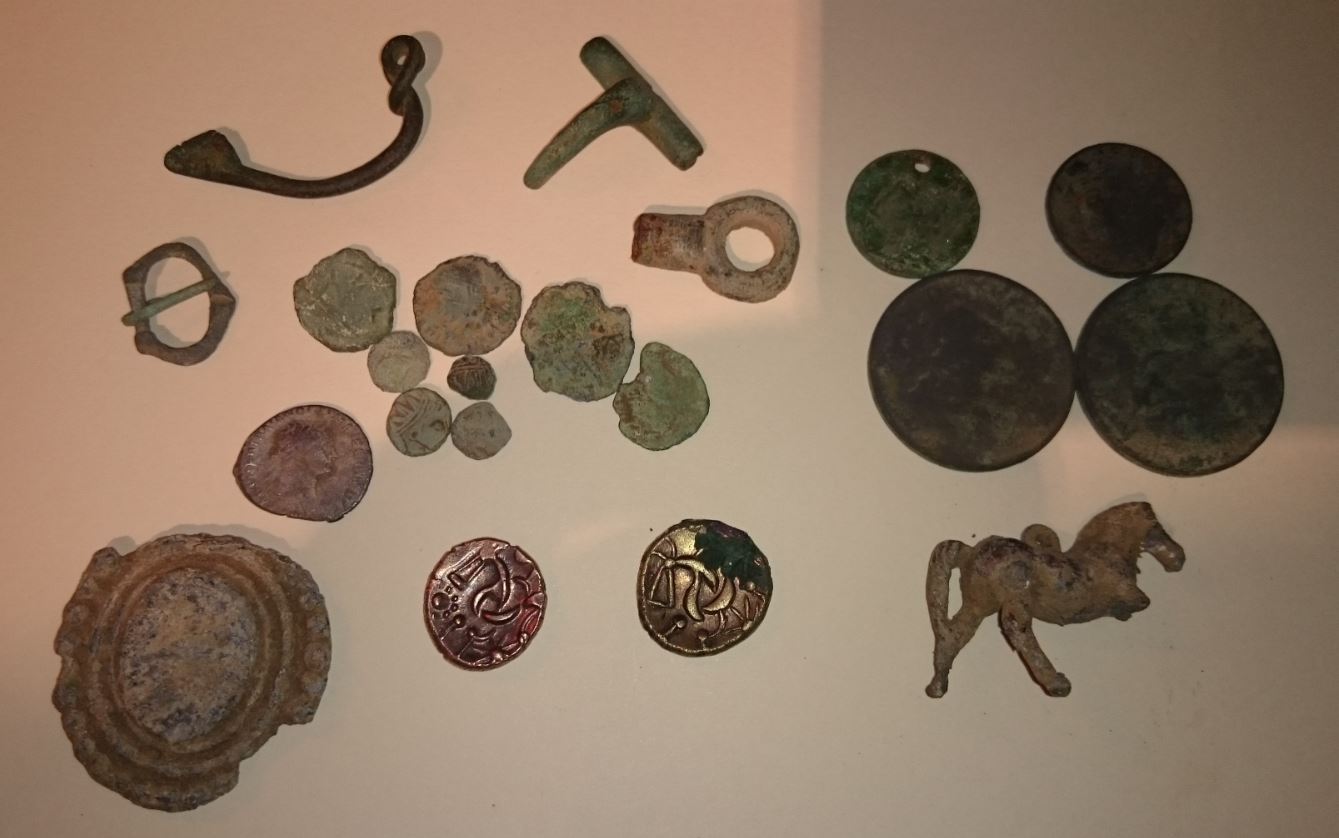 After a few paces I had another scratchy signal, I was pleased to see a small broken fibula in the clod I thought I was walking away from signs of habitation so the XP Deus gave me more and more confidence. A bit further on I had yet another minim so from never having found one before I now had four in total….I love this machine !

I was getting to the end of the run and about to turn around when I had a proper ear splitter of a signal it was giving the indication of being right on top so I went straight in with the probe. Sure enough the probe sounded
off as soon as it hit the soil so I gently lifted a bit of soil with my hand trowel. Probe back in and I’m right on it, a glimpse of gold!! Could it be?? At first when I lifted it out I thought it was a button, but as I turned it over I realised… this was another stater. It looked more golden than the bronze cored one I had found previously, most of the gold plate had fallen off that one, but it still had a bit of “rot” on it which in my head I knew meant it was another bronze core contemporary forgery, but still, what an amazing find! I took a minute to gently pick the dirt out of the detail and I could see the abstract shape of the horse, I was buzzing and shaking like a leaf! I put it securely away in my finds box and gathered my thoughts to set off again. 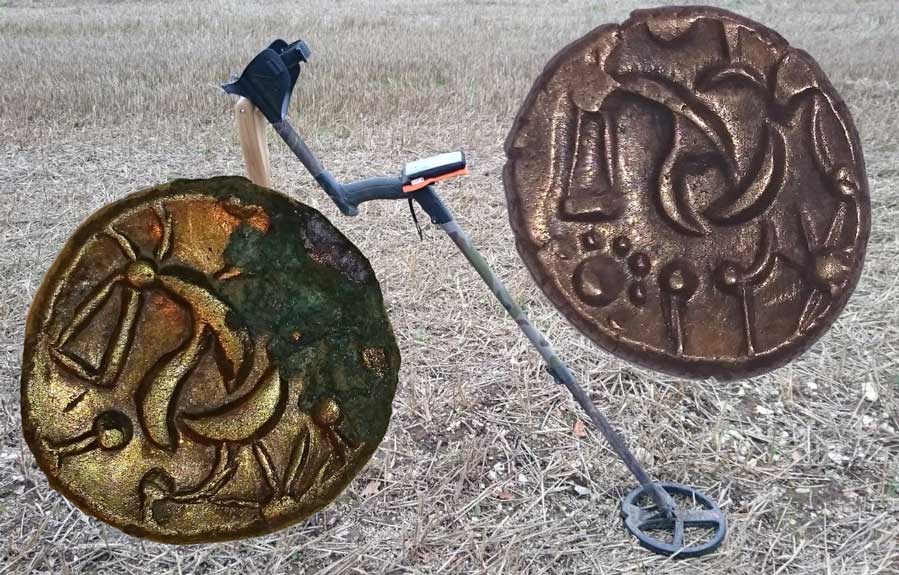 With more enthusiasm than ever before I decided to do the entire row before doing an about turn and coming back down the next clear row. I had done maybe 20 paces when I got a great signal just in the first cut of stubble, I flattened the stubble down a bit with my boot to try the signal from another angle and it was really sweet. In went the spade and I took a clump out, stuck the probe on the outside and it’s bang in the middle. I picked the clump up and it fell in two pieces, I rotated the piece still in my hand to use the probe on it, but I didn’t need to. There sticking out of the side of the clod was the sweetest sight any detectorist wants to see… this was no forgery, this was undeniably the real deal!

I gently picked out the stater and it looked as good as the day it was minted! I could immediately tell it was heavier than the 2 bronze core ones I had found and the edges bore the tell-tale splitting of those ancient hammer blows. I would love to tell you I danced like a lunatic and howled in excitement, but to be honest I fell onto my backside and just sat staring at it in my hand. I don’t know how long I did that for, I was in a bit of a haze if I’m honest and time was against me as I had to collect my daughter from her Aunt’s house. Eventually I got up, filled in my hole and put the coin in my box.

I only had 20 minutes left, but couldn’t really concentrate on swinging the coil, all I could think about was what had just surfaced and was now in my finds box. I even managed to pull up another brooch but it was all a bit of a blur. 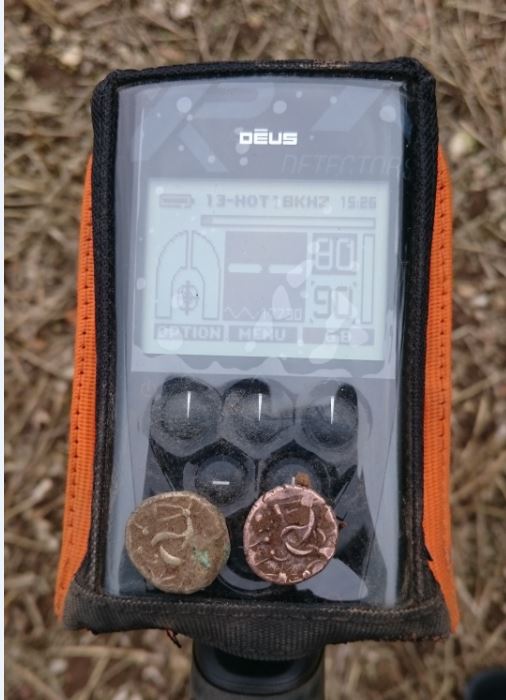 The mile back to the car was surprisingly easy, there was a definite spring in my step despite me having been in the field for 6 hours. The farmer was stood talking to one of his workers when I appeared back, “any good?” he asked. “Aye, not too bad to be honest” I replied. I showed him my finds and he was fascinated with what I was showing him and telling him. “All that is under my feet?” he asked, “well I’ll be buggered!” Classic farmer comment if ever I heard it!

This is my fourth year of detecting and my first season with the XP Deus. I doubt I will ever have another day like this one, but I will try my best! When I detect any fields I name them on Google Earth on my laptop, they have various names like “button field” and “Eddy field”, this one I have called “Field of Dreams” and I hope there are more to come, I’m sure there will be now I have the XP Deus !
By Chris B …Oscar 6972 on Garys detecting Forum

Send in your XP story to : xpclassroom@gmail.com