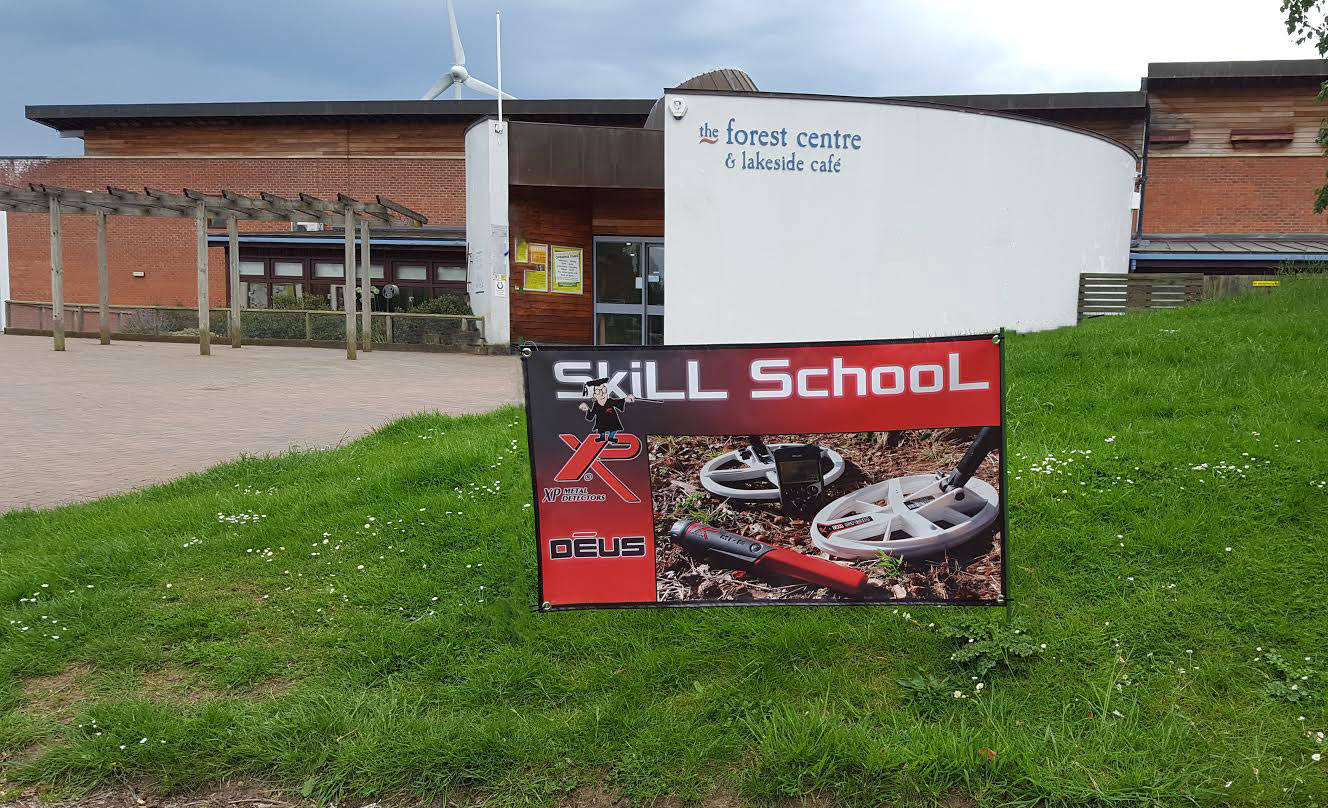 This XP metal detector event was exactly what the doctor ordered and exceeded all my expectations. When I signed up I wasn’t sure what to expect – this was a ticket only event for 25 people and the first of its kind.

Most people arrived early and the staff at the Forest of Marston Vale Centre made us feel very welcome and catered to our every need.

The Skill school was made up by a mixture of trade and public, some travelling all the way down from Scotland, by 10am everyone arrived and enjoyed coffee, tea and pastries while the seminar got underway. 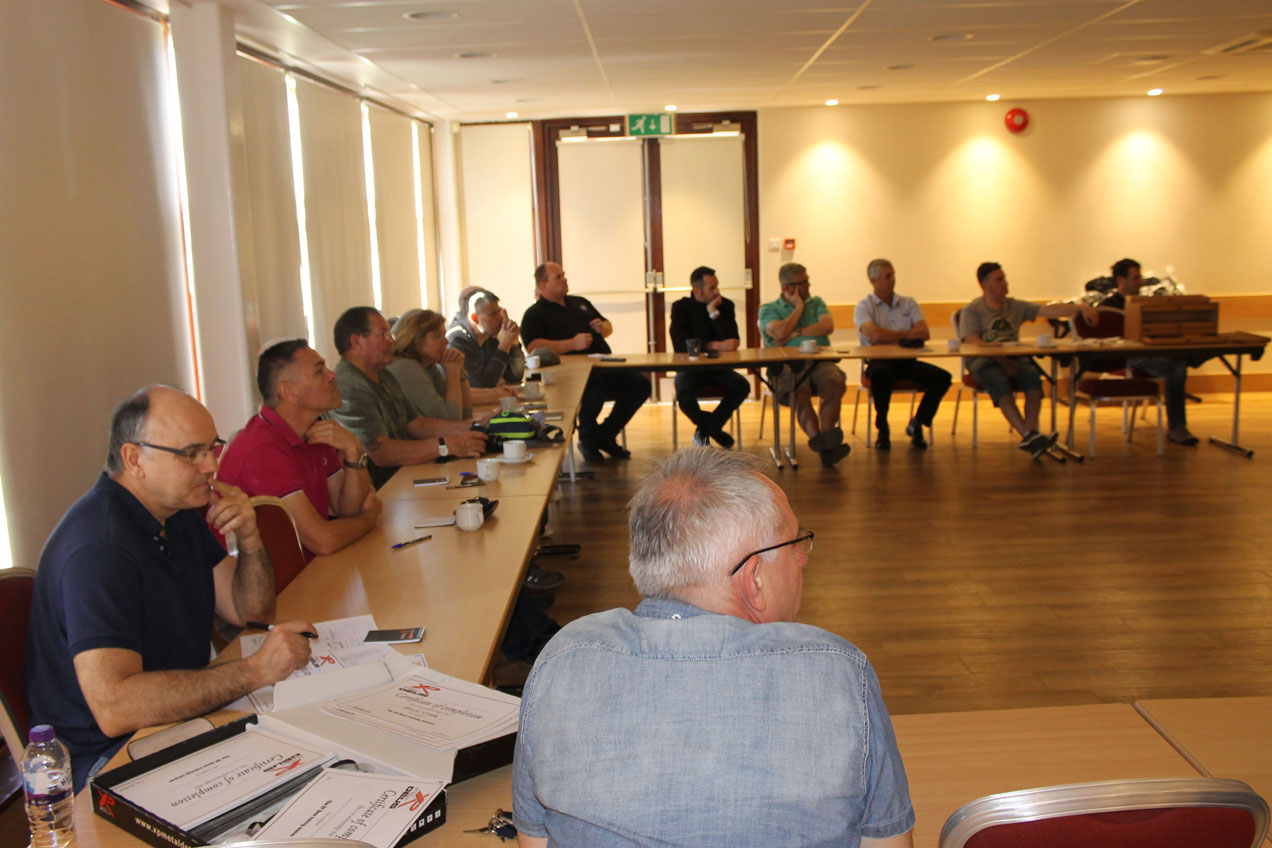 Gary started with a brief introduction running through the objectives of the day and showed us a short video on the XP factory and the impressive robotic production line assembling their many products. He then launched into typical questions people ask him about the Deus, and explained what they should really be asking him about to get the most out of their machine and common metal detecting mistakes and misconceptions.

Gary made it clear from the start this was not going to be a 4 hour re-hash of the Deus manual.  The seminar was designed to help explain some of the grey areas of the Deus and get people thinking about how they could get the most out of their detector.

Within the first 10 minutes I knew this seminar was different. Having attended and presented many seminars through my day job I could clearly see a lot of thought had gone into the approach and the platform was brilliant.  Gary had a mix of slide show, videos and Q&A which worked perfectly and all confidently delivered at a comfortable pace allowing us to absorb the point he was making, with time to ask questions on how we can apply it to our experience and skill level.  I might add that was no small feat given the seminar was attended by all levels of detectorists from newbies to seasoned detectorists and he managed to cater for all learning styles, everyone felt included and learned loads. 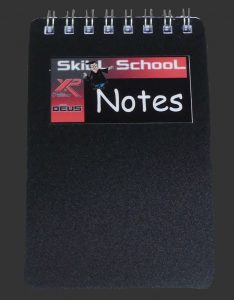 It really worked and it was a nice touch to give everyone their own note pads with the XP Skill School logo on them so we could take notes and not forget what we had learned. 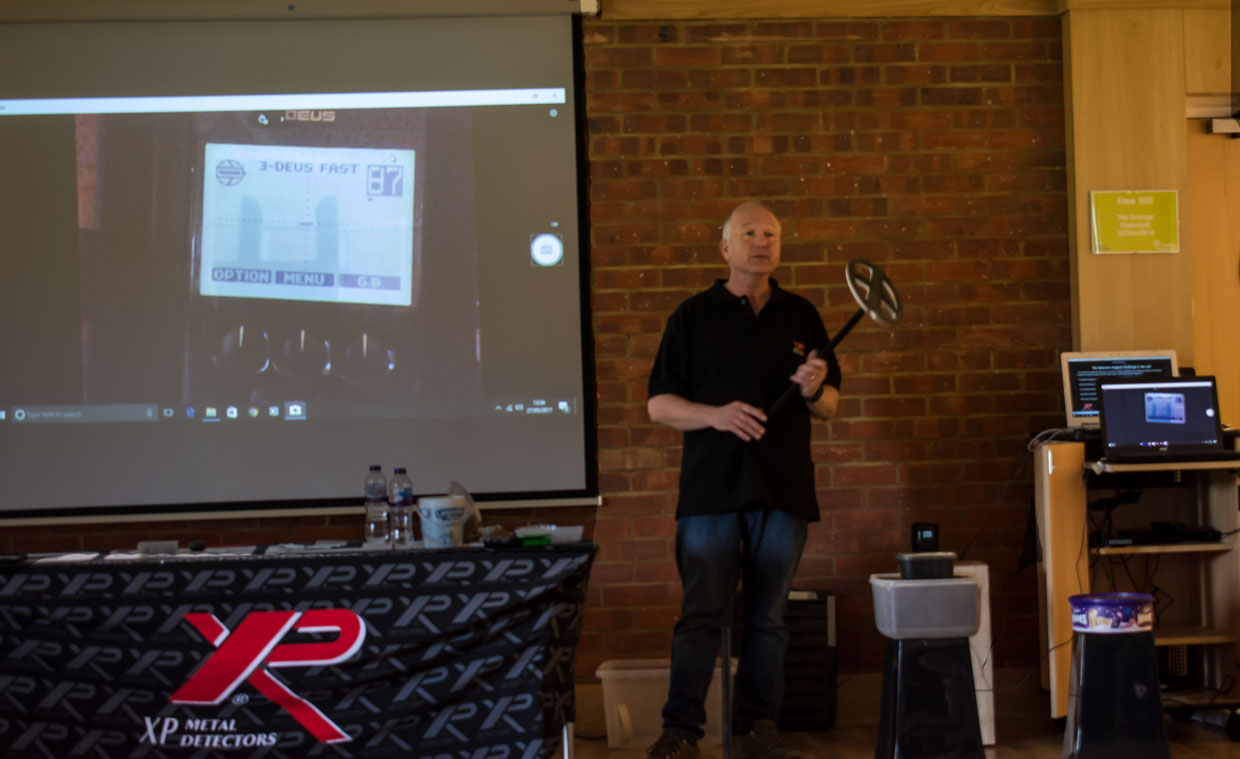 The first hour flew by and then we had a refreshment break and talked about what we had learned over tea and coffee.  Tea and coffee was available for most of the day which gave the whole day a relaxed atmosphere. I was not surprised during this break to learn that I was not the only person to have learned a lot and there was a real buzz in the room.

The second session flowed on from the first with slightly more technical information. We were now talking about filters, silencer and reactivity.  These have always been subjects I have struggled to understand however using simple charts and clear explanations Gary was able to take away the mystery. I now have a clear understanding of how to adjust my machine to make the most of these features, including when to make these adjustments and when not to. 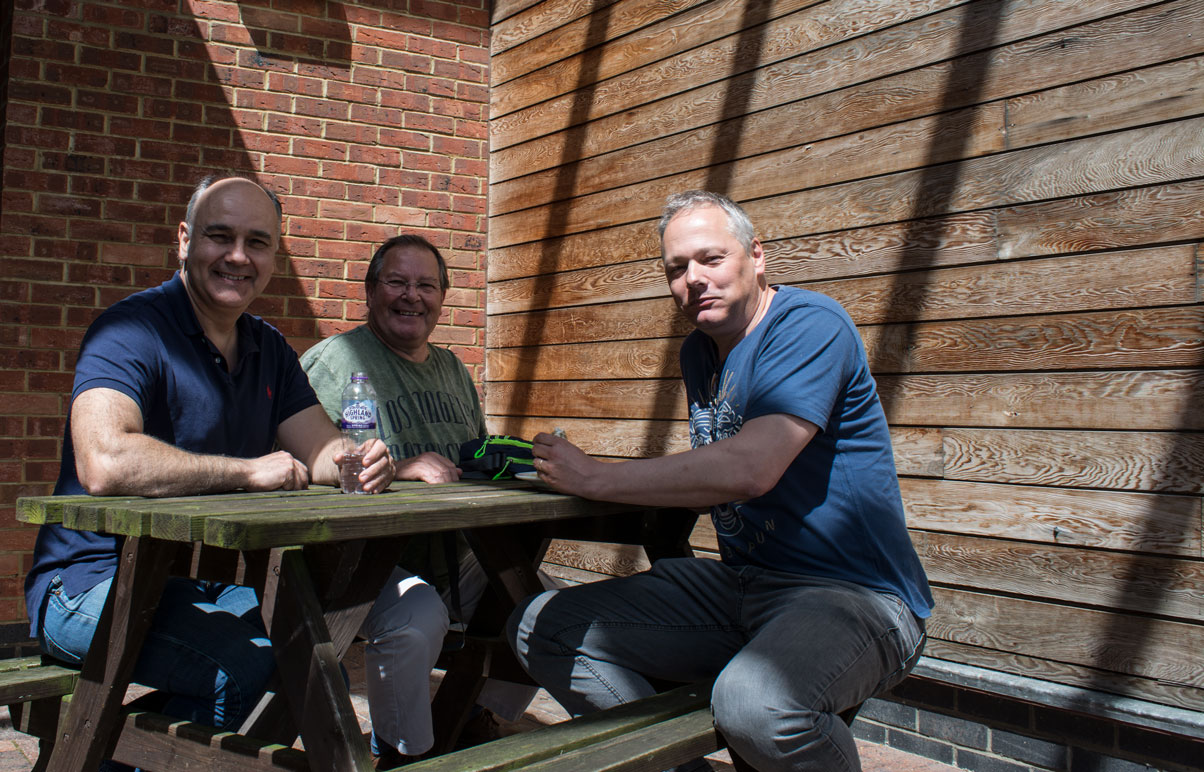 We took a break for lunch and went outside to enjoy the sunshine. It was a beautiful day and we sat and picnic tables and talked about what we had learned in the morning.  Again, everyone was talking about how useful the seminar was and what they would do differently on their next detecting outing.

After lunch Gary introduced what he described as ‘the dreaded subject’ – Ground Balance.  This topic took 45 minutes to cover, mainly because we had questions. Everyone seemed confused at first and then Gary brought out different buckets of mineralized soil and test targets to help explain the concept, switched the main screen view from the slide show to a live Deus RC feed and it was amazing, suddenly everyone could see what was happening in real time from their seats and it all made sense.
This section flowed nicely onto the new high frequency coils, and what advantages they offered, I was shocked when Gary demonstrated a fibula on the surface of highly mineralised soil was not detectable at 18Khz, but suitably impressed when the HF coil at 50Khz picked it up with ease. We then talked in depth about the High Frequency coils and the advantages they could offer.
It certainly got everyone’s minds working and for me opened up a whole new line of thought.

Attending the Skill School was a real turning point for me.  I learned so much about the Deus that it seems like a whole new machine and I just wanted to get out in the field and detect and try my knew knowledge.

And that is what we did. Gary closed the seminar at around 2.45 with a final video and then surprised us all by telling us to look in our Skill School notepads where there was a number for a prize draw.  Nick Webb, the centre Manager and a fellow detectorist and Deus user was asked to draw the raffle ticket and one lucky attendee was given a brand new MI-6 pinpoint probe to top off the day!  We were then awarded attendance certificates and asked to meet at reception with our detectors. 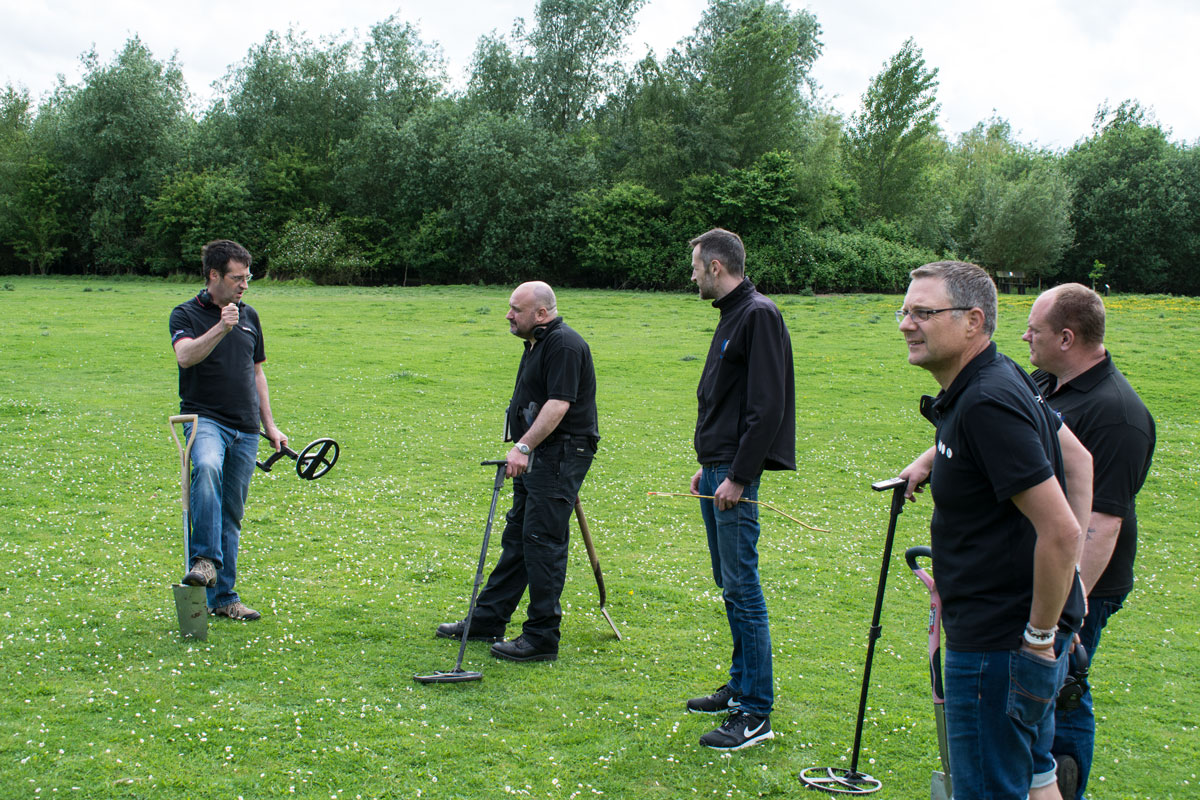 Once we had all gathered together we were led out to a detecting area where we could put into practice our new found Deus skills. 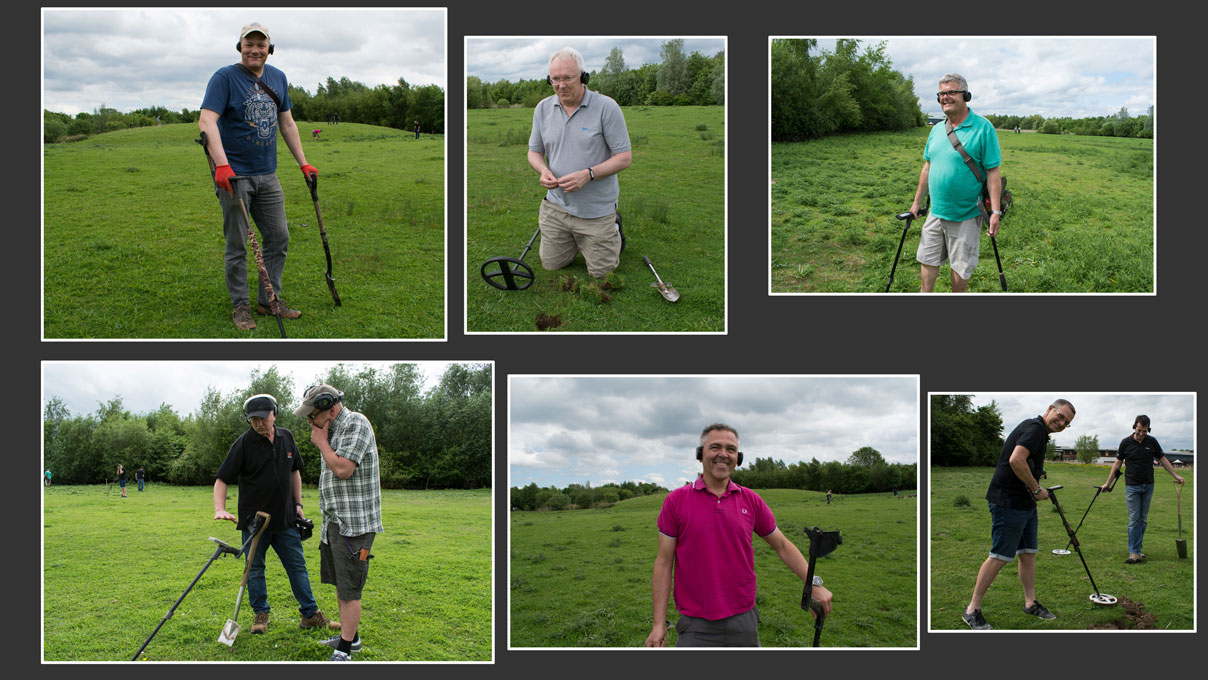 The whole event was perfect and I really can’t recommend it enough. 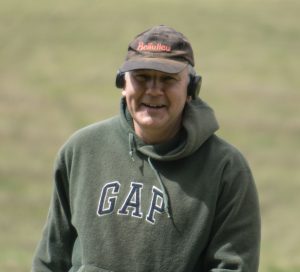