Only One Detector Could Hear This Coin Spill

XP Deus USA – This is my story about finding a deep coin spill.

Greg and myself were invited to metal detect with a couple of friends (Dave and Joe) from Cameron County, Pennsylvania. I grew up there in a small town called Emporium. I travel back to that part of the state a couple of times a year to visit friends and family, go hunting, fishing, and of course, METAL DETECTING. It’s a beautiful part of the state nestled in the Allegheny mountains. 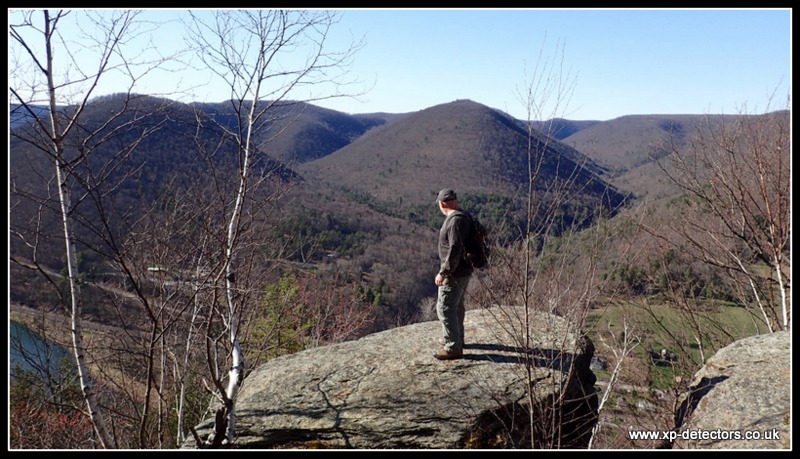 During this trip, Dave had secured a permission for us to hunt that included a potential area where an old school once stood, an old hunting camp, and an old foundation possibly dating back to the late 1800s. 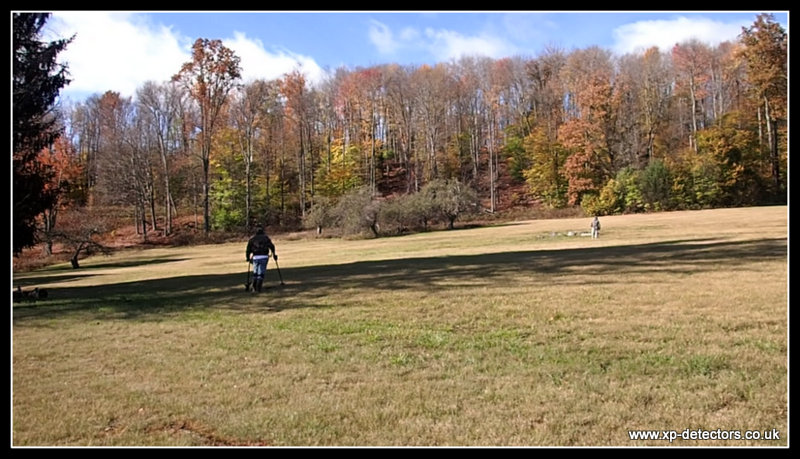 EARLY FINDS:
At first, we all were finding loads modern brass bullets. We all came to the conclusion that a lot of shooting practice must have taken place at the hunting camp over its many years. In addition, we all dug a fair share of hunting camp trash (especially Greg).

We did end up with some really nice relics which included Greg’s toy car, Dave’s pocket knife, Joe’s axe head, a few buckles, an old rail road key and much more.

We all found a few coins which included Dave’s 1945 Mercury dime and Greg’s 2 Indian head pennies. But the coin spill really changed the day for me. 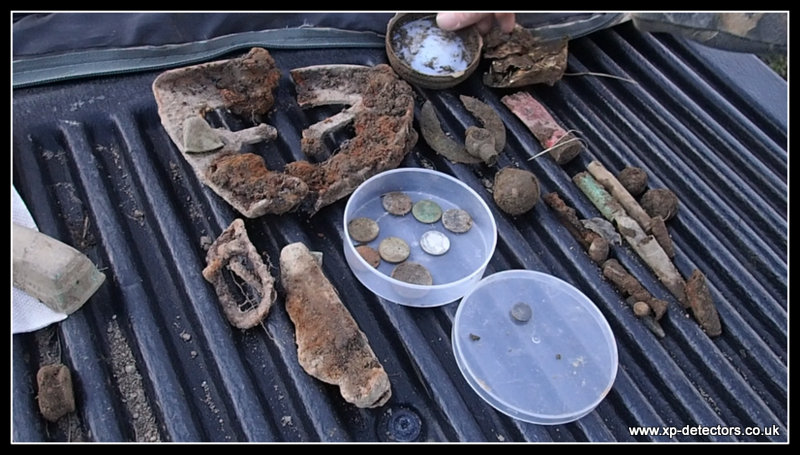 HITTING THE COIN SPILL
Like I said, most of us dug a lot of bullets that day and because they contained brass, all of them sounded great. I also tuned up my “Audio Response” to 5 because I like to hear the faint deeps signals amplified and I’m glad I did on this particular day. I came across a good signal that sounded a lot like the other bullets we were digging. However, I wasn’t registering any VDI numbers so I knew it was deep.

After getting down to about 10 inches out popped a wheat penny. I was a little disappointed because I was hoping for an Indian head since the coin was really deep. I checked the hole again with my pin pointer and there was another signal and another coin. Then there was another coin and things began to get real interesting. 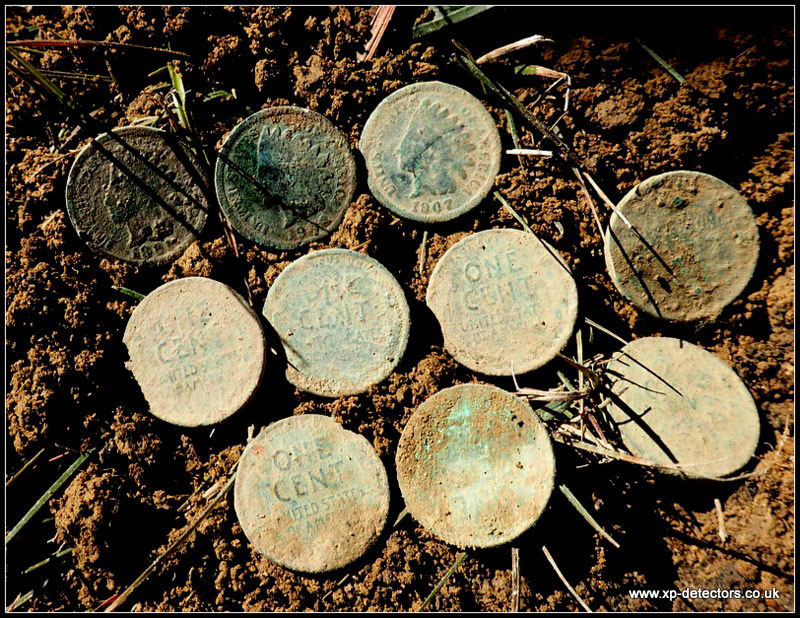 I ended up pulling up 21 coins total from the same hole. It was my biggest coin spill ever. The coins ended up being all pennies but 5 of them were Indian head pennies. 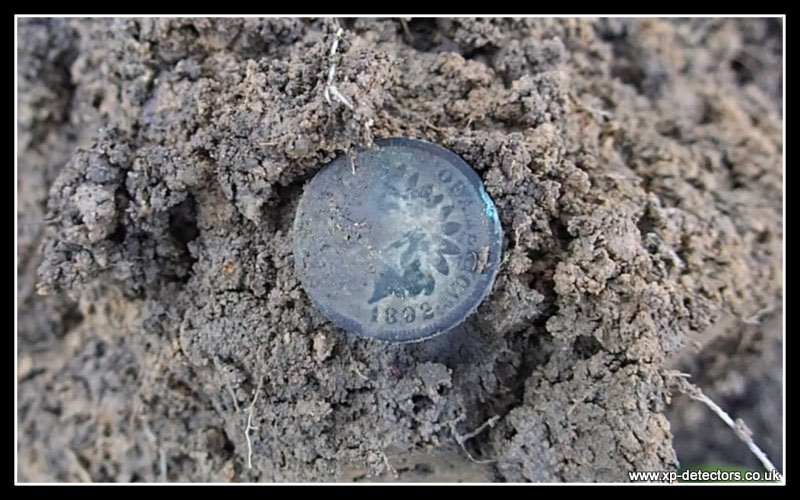 The oldest one dating 1892. The rest were wheat pennies from the early 1900s but a great finds nevertheless. 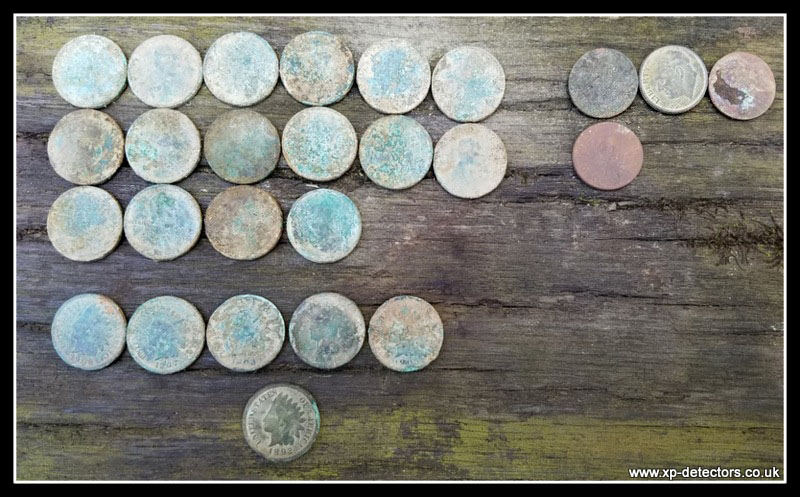 MY DEUS SETTINGS:
The conditions were perfect for the XP Deus. The ground was wet, easy to dig, and almost no interference. The ground did have a lot of iron throughout the property but it wasn’t terribly bad. I set up the XP Deus with my favourite program called the MM314-12. I also have the MM314-4, MM314-8, and 18 respectfully. Each program is set up the same except the frequency which is represented by the last 2 numbers of the programs (listed above). I’ve been doing it this way to learn how some of the different frequencies react to the same target. If I feel I’m getting better results due to the ground conditions, I’ll switch programs to the one that best suits my area. Also, I really like using 5 tones and I set them up this way: (number on the left represents the tone frequency)
Tone 1 -100 0
Tone 2 – 100 0 > 28
Tone 3 –  496 28 > 60
Tone 4 – 603 60 > 77
Tone 5 – 800 77 > 99
My other settings include: Iron DISC = 0, Sensitivity = 93, Reactivity = 1, Silencer = -1 (sometimes 0). I had a difficult time ground balancing the Deus at first. I tried to manually set it by “pumping” but I couldn’t find a clean patch of ground so I ended up using “tracking” and watched the machine for a little while to see how it was tracking and then manually switched it to 81. I personally feel that you get a little more performance from setting up your ground balance manually if you can. 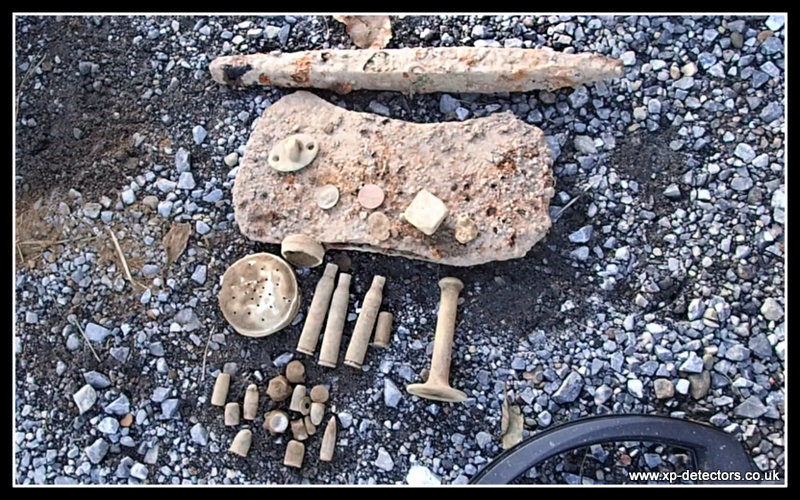 The XP Deus  and Depth.
I was super impressed with the depth I was getting on this particular site.
Sometimes I read  forums and hear people say that the Deus doesn’t go very deep – I totally disagree. It really depends on your conditions and how you have the machine set up.
On this day, 4 machines were being used. 2 AT Pros, 1 MXT, and my Deus. The other guys tried to locate the same coins I was hearing and none of their machines could hear the signals. Not even a small blip of signal could be heard by the other machines.
We were all pretty surprised and impressed with the XP and the depth it was picking up the coins. Clearly, the XP Deus had the advantage on this adventure.

You can watch adventure for yourself here :
Thanks for reading my report….Scott