Got back to the old neighborhood a couple days back and started at a bungalow type house built in the 1920s. One of the first coins to come up was a bent 1926 Wheat, but that was to be the only old coin from that house.  I went around to the backyard to find three Showbiz tokens stacked in the same hole! Too bad they weren’t silver quarters….

After that we found a rental not far from there built in the early 1940s, but this place was also very trashy. The older coins it seemed were 4-5″ deep tangled in the roots, but most of them turned out to be Wheats.
We didn’t stay long at this place since the weather was getting windier and colder. We pulled 4 Wheats on Sunday, and ended the 4-coin silver streak that day as well.

On the Monday I had to drive back to CO again, but decided to see ifmy buddy Gerald wanted to hunt. I didn’t have anything lined up except what Dad and I had hunted the previous day. I had a lead on two rentals, but my information was old and it turned out one of the properties had already been rented. We drove on to where Dad and I had left off, and after about an hour of fairly thorough hunting with only a couple Wheats a piece to show for our efforts…we decided to find another spot…but where?

We drove over a couple of blocks to the old neighborhood I’d lived in for almost four years – this neighborhood is a postwar development which almost every house I ever hunted held at least one silver coin! Gerald and I found two houses side-by-side and we commenced to swinging. I started on one end of the yard, and noticed signals were few and far between. After digging two or three pieces of junk, I locked on to a 71-72 signal (4kHz) which sounded very close to the surface. A minute later I had found a shallow Wheat, and rescanned the hole to find another one inches away. Was on the right track! But signals were just sparse – I wondered at one point if the Deus was working OK, I wasn’t even getting that many trash signals.

Walked onto the curb strip and got a 79-81 reading which jumped around a bit. My car was parked a couple feet away, and I was getting falsing from it, but I knew there was a shallow coin there as well. Was very surprised to see a reeded silver edge and the first silver of the day pops up – a 1917 Merc!

Not thirty feet down the strip I got another 79-81 signal, and from a shallow 3″ out came a 1956 Rosie! Gerald rounded the corner and I showed him the coins, and he was getting worried that the Ol Skunk may pay him a visit today! But I had complete faith in him – shortly thereafter he finds a silver quarter at around 5″ down…like there was even any doubt, right?!

Made my way around the other side of the house, and got a 76-78 signal in both directions, we both called it a silver dime and it was…a 1963 Rosie. I kept getting these “72” readings on the Deus, which in 4 kHz means a copper penny. I must have passed over a few of these before I decided to dig one – and it turned out to be a 1950s Wheat! I quickly had to backtrack and find all of those “72s” again – about half were Memorials while the other half were later-date 1940s and 1950s Wheats. I just can’t seem to leave a Wheat in the ground, and when I pass things over, I ALWAYS regret it – that’s why I dig almost all targets!

I remember getting a solid “64” indication, and this one turned out to be a 1917 D Wheat. Many times those early brassy Wheat cents can indicate like zinc cents, and seeing that green disc in the hole is always rewarding! Still waiting on my 1914 D Wheat (it will come one day!) Ten feet away I got a high 70s hit, and this one was the last silver of the day, a 1953 Rosie.

Between the two of us, we didn’t leave much at that place, and the ground had a lot of clay which I think helped keep the older drops fairly shallow. I didn’t dig a coin at this place deeper than 5″. I had seen this happen at other Memphis locations where the house is on a small hilltop and the targets just aren’t that deep. In contrast I’ve also hunted lower-lying houses where some coins made it to 8″ and deeper….

The 9″ coil performed flawlessly, and I can’t see much difference if any vs the 11″ Deus coil besides the obvious greater coverage area. Now that the days are longer, it’s only a matter of time until I get back to “Deep Coin Park”

I Had time for a short hunt today – I decided to try out an old park not far from home – the same park that I found so many deep coins late last year.
Upon getting there I saw another detectorist using a White’s V3i, and casually made my way over to him, Introduced myself and asked how the “hunt” was going – he had found a single Wheat in another corner of the park, but nothing in an hour or so. Showed him the Deus, and a few of the controls, but he was like me – his time was valuable and was most interested in finding coins rather than talking! I of course respected that and began hunting.

Used my goto 4kHz setup – one thing I’ve noticed with air testing is that the maximum depth difference between Reactivity 1 and 2 is less than an inch on penny/dime sized coins. With the 11″ coil there was more of a difference, but I decided to leave it in Reactivity 2 for the faster processing. It was a very open program:

Some people have stated, “Why don’t you run Disc at 0 if you’re notching 00-10 anyway?” I haven’t tried Disc = 0 but I’ve found that for picking out the smooth, deep signals it seems best to run SLIGHT signal filtering to help with small surface foil (and some deeper foil too), as well as deep iron ID. I have nothing scientific to back this up, but it seems that running Silencer 0 vs -1 helps just a tad with deep iron, and running GB close to neutral (plus or minus 1 in either direction) also helps with tiny foil and iron targets. I never run Sensitivity beyond 85 – always stays between 80-85 not matter what – since too much transmit power can cause falsing. 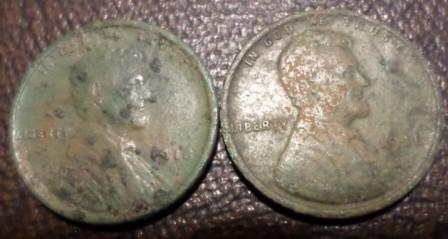 I still end up digging plenty of foil and iron, but when I get over a deep coin (beyond 8″) there’s something a little extra in the audio that puts a smile on my face! Cross-checking 90 degrees usually confirms a coin (not always LOL), and these deep ones almost never give VDI.

The first coin dug was a 9″ Wheat dated 1918 D – back in the groove for sure! I actually got VDI from this one, 89-91; and there wasn’t any crackling whatsoever – just a smooth faint hit. Went on to get a 40-51 indication, not quite as faint but deep enough to NOT lock on…was happy to pull a Buffalo nickel but MUCH HAPPIER when I noticed it was a Type 1 WITH a mintmark! Looks like a 1913 D T1 Buffalo which is a semi-key date – the park doesn’t fail to impress – I’ve never hunted an area that gives up so many mintmarked 1910-1920 era coins! 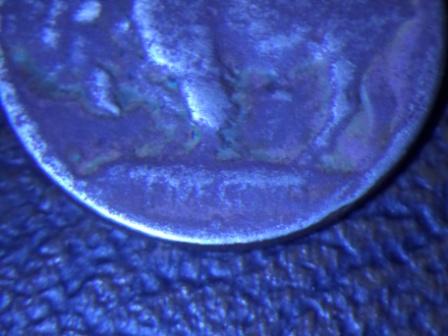 Found some shallow iron targets – it’s always good to get those out of the way since oftentimes there are deeper coins underneath (not today though!) Last coin was a confident non-VDI hit and from about 8″ down comes a nice 1911 Wheat – I’ve absolutely trampled this tiny 50-foot square corner of the park and still pull coins – with the 9″ coil able to reach that deep I’m sure there are some bigger and better goodies just waiting to be found

We finally had a decent day where the snow wasn’t blowing, settled, or otherwise blocking the way to get to a good local spot where older coins seem to congregate! I hunted this park on Monday and found a couple of older Wheats and a nice Type 1 Buffalo nickel, and for the last couple days I’ve been jonesing to get back out there!

Today I picked up in the same 50-foot box where I keep getting faint targets…many of them turn out to be keepers! I ran Disc = 0 today to see if it helped with any of the foil – didn’t see any difference in performance one way or another. First target sounded good and indicated 89-91 VDI un 4khz – at the 7″ mark out came a 1934D Wheat…a little newer than usual but still on the right track – that just proved that I didn’t have the coil over that spot before!

Went on for a while and dug some foil at various places, then finally got over a sweet-sounding “86” that sounded like a deep silver quarter! I got excited but that quickly waned when it turned out to be a pulltab at 5″….re-ground balanced and not 2 feet away I got a faint high-toned hit. Looking at the “horseshoe”, it indicated non-ferrous (right side) about 1/3 of it was shaded. In my experience, this indicates a coin-sized (dime or penny sized) target at about 6″. At about 7″ down out came a pretty sharp 1893 Indian that cleaned up rather well. 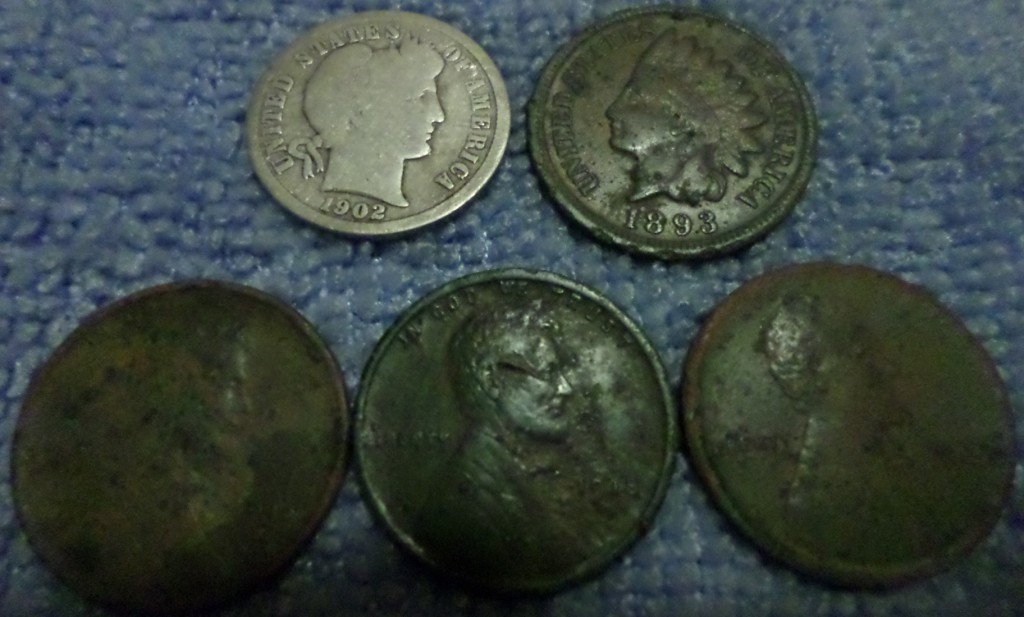 Running Disc = 0 didn’t seem to affect the operation of the “horseshoe”, even for the deeper, tougher targets. Every time I got one of those soft, rolling hits the horseshoe indicated “non-ferrous” – the 1902 Barber Dime was at 8″ and it indicated about 1/6 shaded right side. Didn’t dig ANY IRON today, but when I want to go after those 10″ coins and beyond, I’m sure more will show itself. For now I’m going to leave Disc = 0 – I don’t see anything adverse from running it like this, and when I changed over to an adjacent 8 kHz program (zero Notch, zero Disc) there was no difference in the horseshoe operation that I could tell.

Deepest coin of the day was found right at the end of the hunt, maybe 15 feet from the Barber dime – a 1912 Wheat. I didn’t check the target in other programs since it was getting dark – once I saw it was a Wheat I headed for the car – lunch was a long time ago and I was famished! 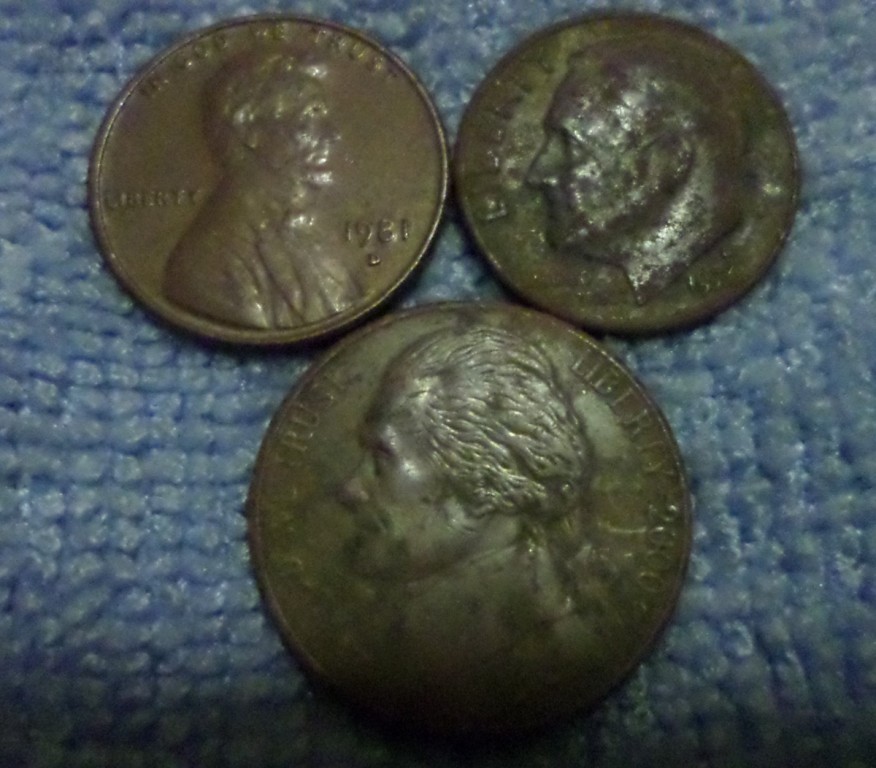 Will be getting back there Monday – the weather is supposed to warm up and be ideal for getting at those deep ones!

Many thanks CZ connoisseur for sharing your adventures and a special thanks to the guys at Findmall Finds Treasure Forums for allowing us to share the posts.