DJ Laan detecting day Netherlands
I was honoured to be invited to a metal detecting event in the Netherlands , I wanted  to see how events were organised overseas compared to the UK.
When I was told the main event was 2 token hunts, I had my concerns based on what I know the English detectorists would say about such an event.
Would a token hunt generate enough interest ?
Dirk Jan owner of  DJ Laan assured me that this was also a social event and a chance to meet fellow detectorists. 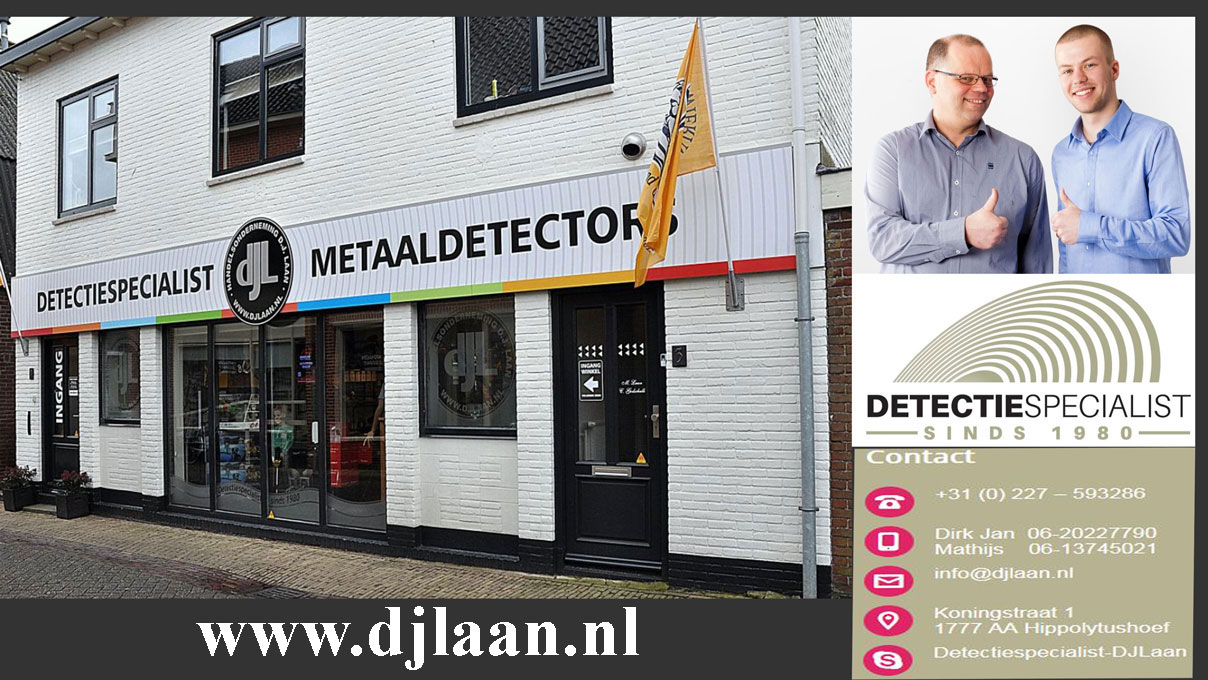 The Flight from Heathrow was only 45 minutes, more time was spent with the UK customs officers explaining the new XP pin pointer was not a Taser gun but a hand held metal detector, if anyone is travelling overseas with a detector it’s always worth bringing a magazine with you… it helps.
On the other side Dutch customs were a little more forgiving, at passport control the officer looked up and asked where I was going, I replied “I don’t know and if I did know I probably couldn’t pronounce it”. He gave me my passport back and waved me on my way.
Thankfully Mathijs was outside to collect me.

Who are DJ Laan ?

DJ Laan NL are a specialist metal detector shop owned and run by a father and son team, Dirk Jan  and Mathijs. The shop has been trading since 1980 and has a very large customer base.  I visited the shop in the beautiful town of Hippolytushoef,  and have to say I was very impressed with the attention to detail,  it was nice and spacious and well equipped with all makes of machines, artefact displays and metal detecting accessories. A real Aladdin’s cave for the detectorist.
Dirk Jan and Mathijs wanted to organise an event at the Schoonhoven in a town called  Hollandscheveld in the region of Hoogeveen, to say thank you to existing customers and welcome new prospective ones, which I thought was a very nice gesture.

The XP Marshall’s and organisers 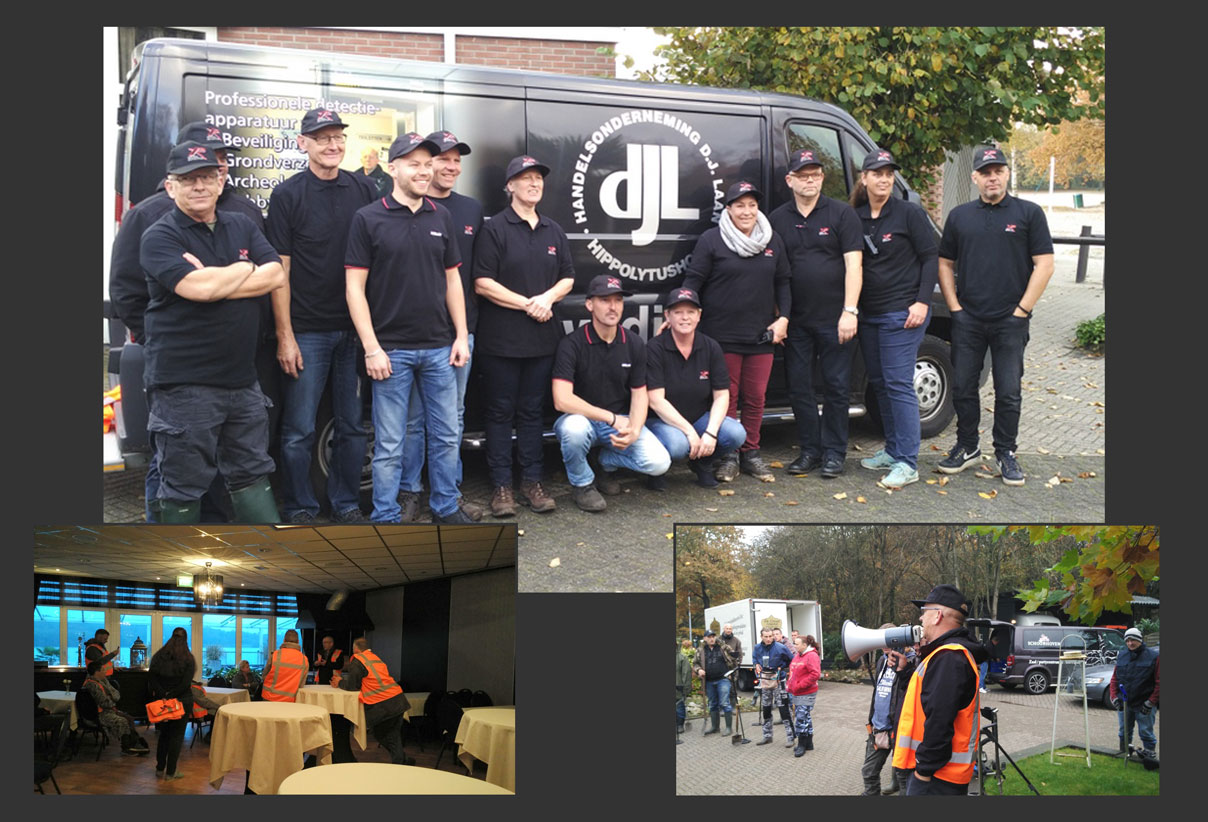 The event was ticket only and limited to 250 people, behind the scenes Roy Hutters and his team worked very hard, Roy is a very good friend of the shop and respected member of the Dutch detecting world.
The tickets sold out very quickly even though it was a token hunt…which says a lot about the enthusiasm and loyalty of the Dutch detectorists.
The day started very early in the morning, it was a long drive to the event, the stands had to be set up and marshals needed to be briefed.
I have to say the event organisers and marshals did a fantastic job, everything went like clockwork, I know what stress it can be after recently co organising the XP rally.
DJ Laan’s stand was the main attraction in the hall which comprised of a bar and a very civilised restaurant area overlooking the lake and breath-taking scenery.
Mathijs and myself spent most of the morning talking to people about the new XP products, while Dad Dirk Jan talked to customers and took orders, it was a really busy event with lots of positive energy and high spirits. 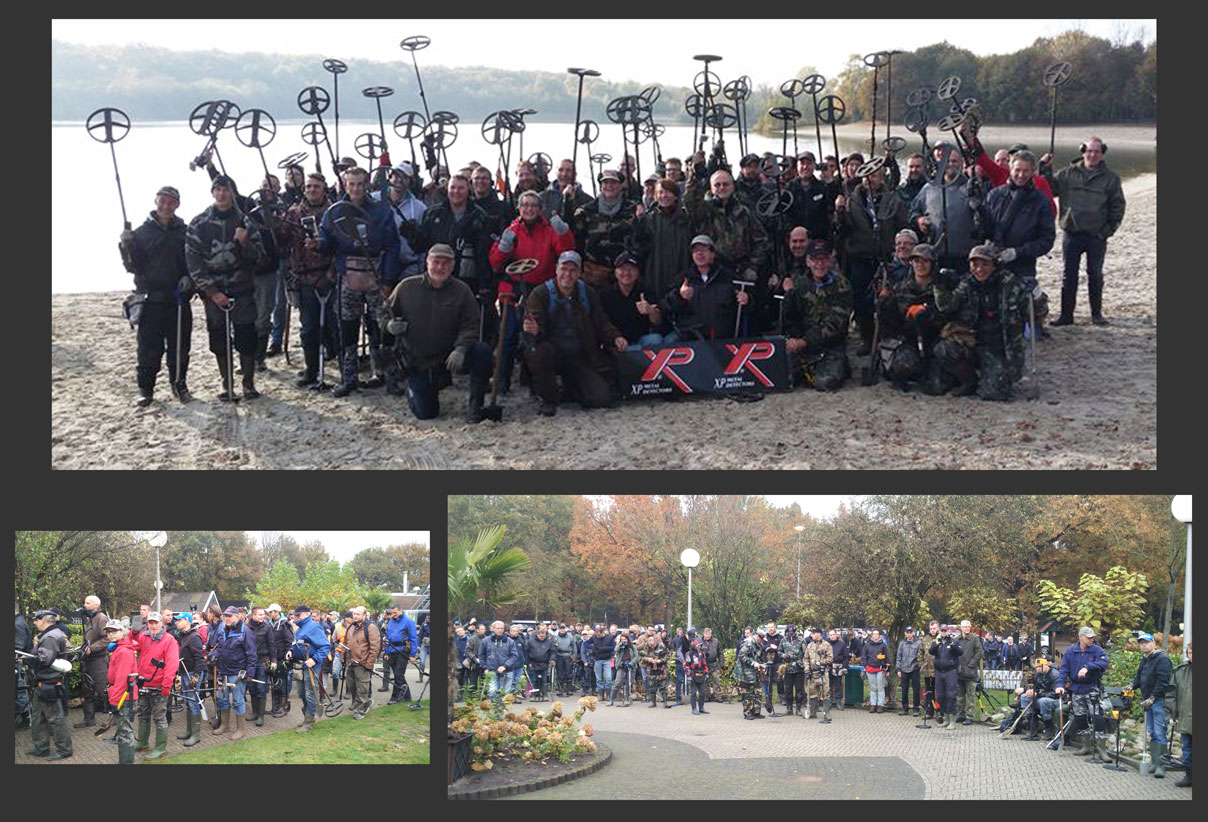 The day consisted of a morning and afternoon token hunt, 500 tokens were buried.
Once found the tokens were exchanged for raffle tickets and then entered into  the main prize draw.
The first prize was an XP Deus. 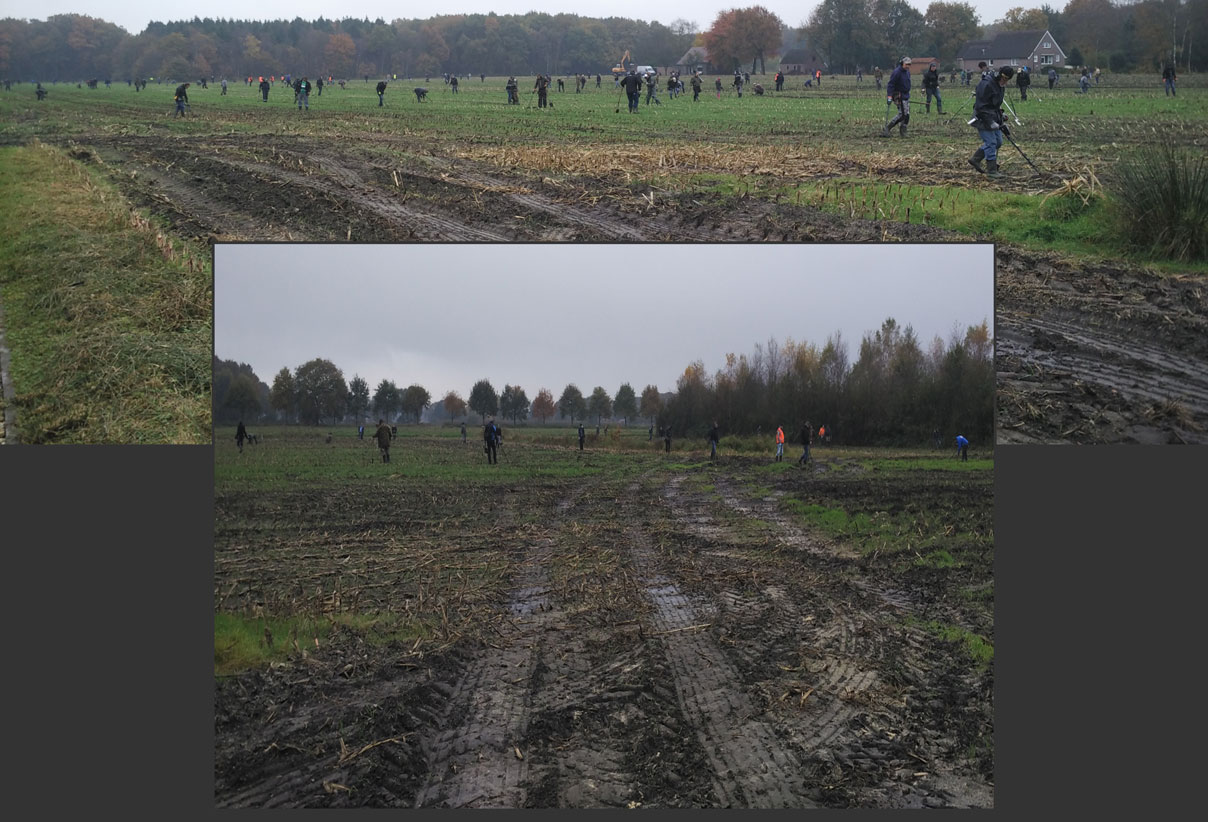 I found the whole day very uplifting and overwhelmed by the amount of XP Deus users who attended, the comradery between the Dutch detectorists was something to behold.
DJ. Laan XP sponsored detecting day group picture. 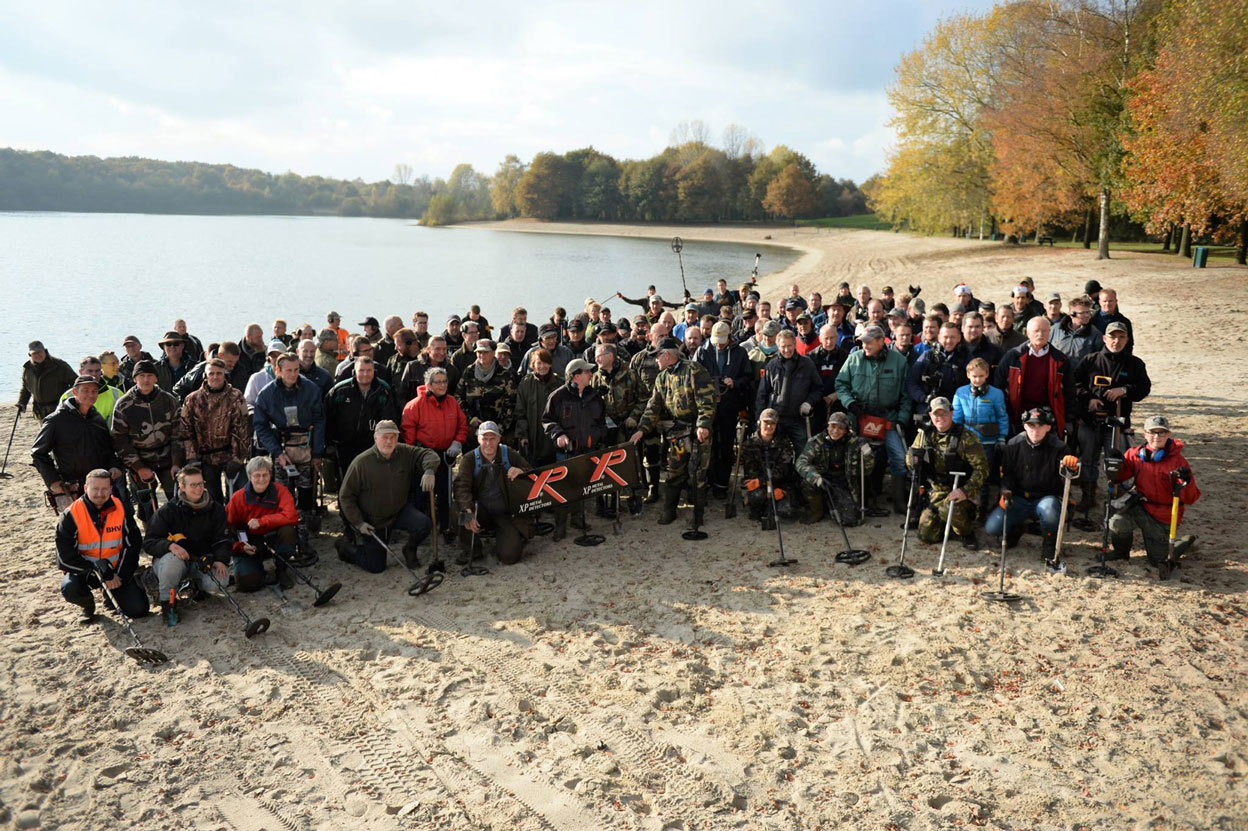 Well what can I say about the Dutch hospitality, It was second to none, I really enjoyed their company, the Dutch are truly fantastic people and ambassadors for our hobby.

What are my thoughts about token hunts now ?

I’m converted !! Everyone enjoyed the event and it proved to me that metal detecting rallies are not just about finding the best treasure, they are about being a part of a thriving community, throw in some drink and good food and you have it made., 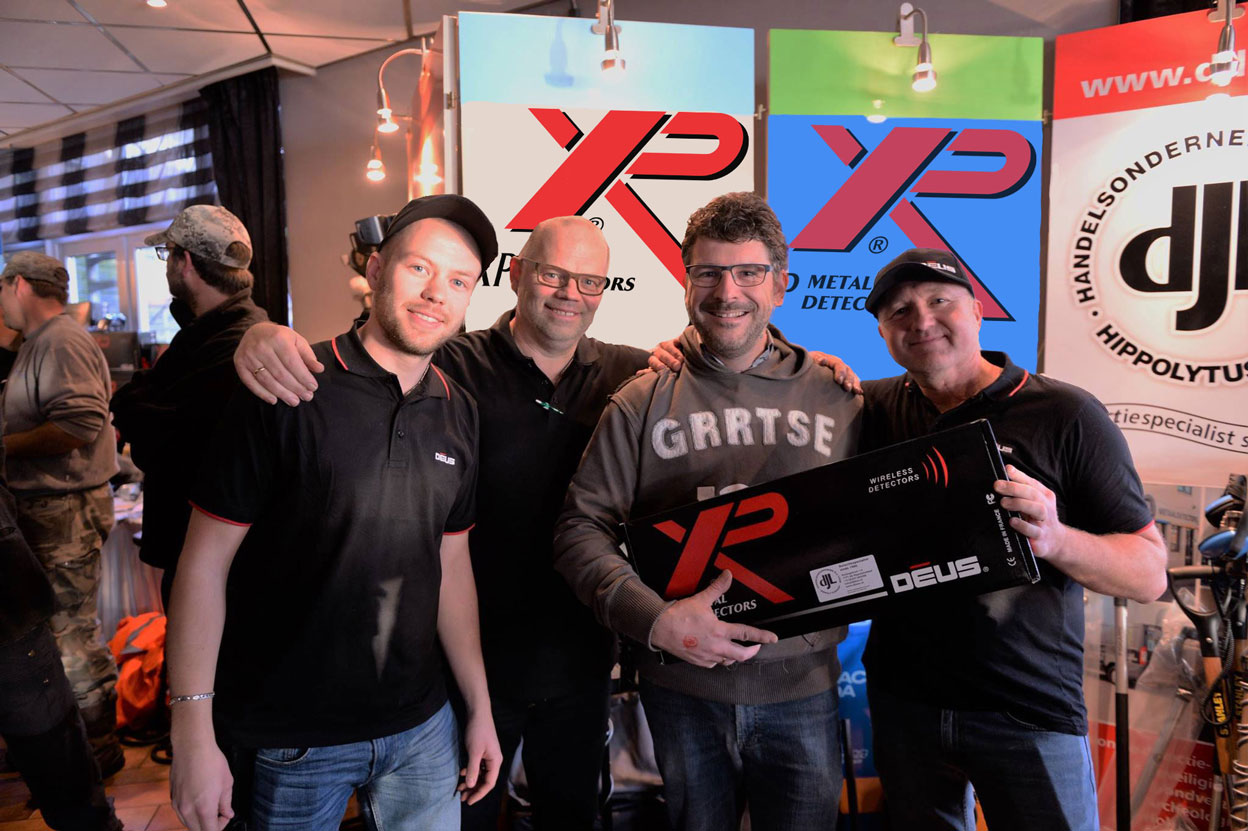 The young man who won the first prize was congratulated by everyone, you could see by his face he was utterly speechless and in a state of shock.
I missed the other prizes because of my flight times and it was a 170Km drive back to Schiphol airport (Thanks again Mathijs).
I would like to thanks everyone who attended the event for your hospitality and for supporting our products. We are very much looking forward to next years event…..
Gary Blackwell